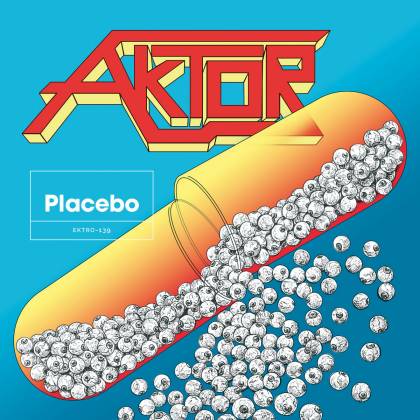 Chicago's Professor Black and Finnish musician Jussi Lehtisalo are two of the most underappreciated — and versatile — musicians in rock music. The former has capably juggled melodic thrash with DAWNBRINGER, catchy rock anthems with HIGH SPIRITS, and tributes to the sounds of MOTÖRHEAD and early BATHORY under his own name. Lehtisalo has spent nearly three decades as the mastermind of psychedelic kraut-rock wizards CIRCLE and stoner-prog greats PHARAOH OVERLORD while indulging in death metal, punk rock, electronica, and more with dozens of side projects. Comparatively, AKTOR — a collaboration where the duo are joined by Lehtisalo's fellow CIRCLE bandmate Tomi Leppänen on drums — is a more straightforward rock project.

AKTOR's first proper full-length, 2015's "Paranoia", was a fun blast of sci-fi-influenced throwback rock that was full of catchy anthems for fans of '70s rock acts such as BLUE ÖYSTER CULT and CHEAP TRICK. "Placebo" sees the trio's obsessions with outer space and a good hook form a winning combination once again. While not explicitly marketed as a concept record, the album's lyrical themes and musical progression ebbs and flows like a good sci-fi story. AKTOR keeps the musical proceedings accessible throughout, with the feeling at the end of the record resembling the experience of having watched a breezy episode of the "Buck Rogers in the 25th Century" television series from the early 1980s.

That's not to say that there are not moodier moments to be found on "Placebo". Those moments though are brief, as Black and Lehtisalo steer their musical spaceship through the rocky asteroid belts back towards a lighter feel, with catchy choruses, infectious handclaps, and cowbell that would cure famed BLUE ÖYSTER CULT producer "Bruce Dickinson"'s fever. In 2020 there are dozens of bands that tap the well of melodic rock music from the 1977-1983 time period for their musical inspirations. AKTOR is one of the few that replicate the truly warm feel of those vintage records and avoid the pitfalls of being a mere mechanical reproduction.

The group's delightful earworm producing secret weapon is their prolific use of keyboards in a similar manner to yesteryear's great sci-fi soundtracks. Whether it's the hard-driving riffs that open the album on "Bad Mirror", the catchy choruses of "Washed Away" and "Save You From Me", or the moody slow burn of "Seeing Rocks in the Sky", Lehtisalo's and Leppänen use synths to create a haunting aura of ominous doom during the slower moments of the record, and a sense of triumphant victory on more upbeat tracks, enhances the galactic feel of the group's lyrical ambitions. Lehtisalo and Black are adventurous with their guitar arrangements as well, favoring warm kraut-rock over ear-searing shred, all while Black's fevered shouts drive the vocal side of the record.

The only real complaint one can make about "Placebo" is that it ends a bit abruptly with its short running time. But much like an episode of your favorite science-fiction television series, AKTOR leaves the listener wanting to tune in again to see what happens next week.