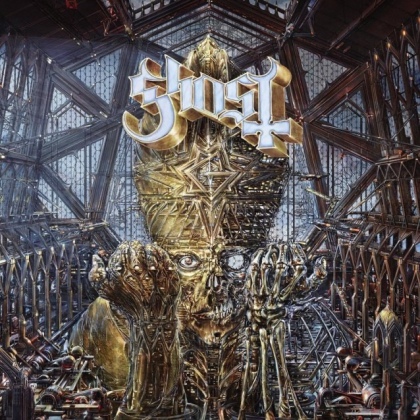 You will have heard the singles and witnessed the ripples of excitement that greet every successive announcement. The fact is, the new GHOST album is an absolute riot and it's hard to see any future that doesn't involve this band becoming even bigger than they already are. Recent times have proven that the Swedes are well-equipped to take their sound and their show from clubs to arenas, and "Impera" is exactly the record they needed to make to ensure that the transition is a lasting one. This thing is so infernally catchy and joyously overblown that cynicism is not a credible option.

From the sonorous pomp of the opening "Imperium", GHOST's fifth full-length is very obviously bigger, better, shinier and sharper than anything the band have done before. The band's last record, "Prequelle", was certainly full of big tunes, but nothing on it strode quite so purposefully into AOR territory as "Kaisarion", which kicks things off in earnest here. A high-energy blizzard of hooks and prog-tinged tempo changes, it's instantly recognizable as GHOST, but the mischievous twinkle in Papa Emeritus IV's eye is brighter than ever. Even more ludicrous, in the best possible way, is "Spillways", which owes its heart and soul to BOSTON, JOURNEY and FOREIGNER and crams a phenomenal number of iconic AOR tropes into its three, breathless minutes. Similarly, teaser single "Hunters Moon" reimagines the Swedes' sound as synth-laced, '80s hard rock, with TODD RUNDGREN-style harmonies and every trick in the studio book brought to bear on the song's innumerable melodic treasures. Meanwhile, latest single "Twenties" is a lurching, juddering dance of death, but with a chorus so insistent it'll be still be stuck in our skulls come Christmas.

There are slower, darker textures to be explored here, too. "Call Me Little Sunshine" is a doomy but romantic ballad and a possible missing link between BLACK SABBATH and ABBA: a doomy ballad; "Darkness At The Heart Of My Love" is a quasi-choral show-stopper with bonus harpsicords; and the closing "Respite On The Spitalfields" is a gently progressive grand finale with a chorus of outrageous hugeness. Every last bit of it sounds immaculate, too, distinctive and quirky, in the way GHOST's records always are, but also warm and dynamic. In fact, everything about "Impera" is huge.

The only downside to this whole, boisterously entertaining enterprise is that "Impera" is not an album that oozes darkness in any meaningful way. The creepiness and otherworldly allure that made GHOST's debut album "Opus Eponymous" so compelling more than a decade ago have been replaced with an almost cartoonish, pop-rock sheen, and any semblance of macabre intent has been smoothed away. Admittedly, the result is one of the most spectacular and hook-filled heavy(ish) metal albums in recent memory, so even without the looming sense that Satan is watching, GHOST are still impossible to resist.