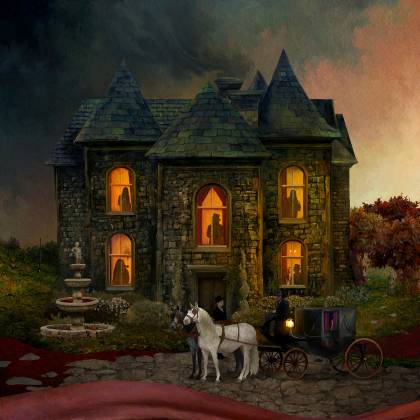 If you have attended a live performance from OPETH within the last decade, you have experienced a moment that occurs during every one of their concerts. After several songs in a row from the later era of the band — a stretch that typically may also include one of the many ballads from 2003's "Damnation" — there will inevitably be that moment during a quieter stretch where that guy who still has not given up hope yet that the band will revert back to its more overtly heavier days will scream for the band to "play some fucking DEATH METAL!"

We are well over into a decade into OPETH's transition from a death metal band with a proggy twist to a rock band increasingly leaning heavily into 1970's-influenced prog-rock. There should be no surprises regarding the direction the band is going at this stage of their career. That's what makes it so much more stunning – and satisfying – that their latest record, "In Cauda Venenum", comes off as the final kiss-off to those still clinging onto their selfish desire that OPETH return to the sound of "Orchid" and "Morningrise". The group steers even harder into ornate beauty this time around, so much so that it is the prettiest and most flowery expression of Mikael Åkerfeldt's prog-rock obsessions to date.

There are still moments of heaviness that will forever be hard-coded into the band's blueprint. This time though, they are used as background noise for Åkerfeldt's layered rock screams on tracks such as proper album opener "Dignity" and "Next of Kin", or they will dissipate into codas that overflow with softer pianos, acoustic guitars and orchestral melodies. An opening sequence that sounds like a super-charged version of LED ZEPPELIN's "Immigrant Song" launches "Heart in Hand" on a path towards powerful rock, which it sustains until a beautiful two-minute outro that doesn't quite match the ending of "Layla" by DEREK AND THE DOMINOS, but comes damn close to accomplishing that feat. The heaviest sounds to be found on "In Cauda Venenum" are contained within "Charlatan", a number that is propelled by an angular guitar riff from the MESHUGGAH songbook while keyboardist Joakin Svalberg layers an unsettling Mellotron score underneath to give a more disorienting aura to the track.

There's still plenty to rock out to on "In Cauda Venenum", especially when the lush bass performance of Martin Méndez looms large in the production, but the part of Åkerfeldt's record collection that begins and ends with early GENESIS hovers throughout the record. "Lovelorn Crime" is a gorgeous piano-driven ballad featuring some of the softest vocals of Åkerfeldt's career and a lovely closing solo from guitarist Fredrik Åkesson. "Universal Truth" steadily alternates between faux-orchestral passages and majestic acoustic strings, and heavier rock stretches where Åkerfeldt hits falsetto ranges on his vocals. "The Garroter" is a dark jazz number driven by an ominous piano riff.

The lyrics for "In Cauda Venenum" were originally composed and recorded in Swedish, though the non-vocal differences between the original and the English version are very few, and upon initial listens, those few differences seem to be very minor chord alterations. If you were hoping for one version to be heavier than the other, you're out of luck.

You are in luck though if you have been on-board with the direction OPETH has been steering towards over the last decade. The progressive-music elements have always been there, but the band's choice to make an even more dramatic turn into that direction on "In Cauda Venenum" has resulted in the best album of the second half of their career.