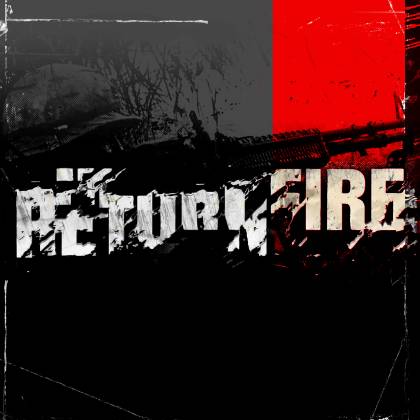 They say that history is written by the victors. In heavy metal, history tends to be written — or at least made — by singers and guitarists, which means that people like Joe Nuñez tend to remain unsung heroes, with glittering resumes but little in the way of individual acclaim. You will, of course, be more than familiar with Joe Nuñez because of his two stints in SOULFLY during which he contributed to five studio albums and some of the band's finest work. But now seems a good time for this perennial sideman to take center stage, albeit still from behind the drum kit. RETURN FIRE is Nuñez's project through-and-through and it's one hell of a way to forge a new musical path. The presence of former colleague Marc Rizzo (still a member of SOULFLY, of course) on lead guitar duties aside, this is very much a leap into the creative unknown for the drummer, but it's one that has instantly paid off.

Many musicians would make a point of straying as far from the beaten track as possible when launching a new band, but Joe Nuñez has sensibly noted that there is nothing quite like balls-out, ferocious thrash metal. RETURN FIRE are by no means a straightforward or remotely retro-minded crew, but it is plainly and audibly thrash that provides these songs with their motivational essence. Nuñez's drumming is whip-sharp and precise throughout, of course, but he's never played with this amount of venom before. Coupled with vocalist Kevin James's vein-popping bark and a great number of vicious riffs, the impact is immediate and wildly exhilarating: from the opening clatter of "Desert Sun" to the blazing intensity of the closing "Massive Collapse", "Return Fire" rips and slices like a mortician's hacksaw in the hands of a maniac.

But this is no straight-ahead thrash metal party: there is a gritty, stripped-down simplicity to the overall sound of songs like "Threes" and "Descend" that feels more closely related to the noise rock of UNSANE and HELMET and the industrial-tinged crunch of PRONG than to anything from the Big Four. Elsewhere, "Eyes On The Prize" is built upon one of those lumbering, churning riffs that typified NAPALM DEATH's mid-'90s groove metal detour, but with the swagger and attitude of prime PANTERA, while "Dead To All" is a flat-out thrasher with shades of EXHORDER, a dash of DEAD KENNEDYS and a hard-on for the mosh-pit. As with many of these songs, it never quite does what you would expect while simultaneously echoing a ton of really cool shit.

In fact, you may reasonably deduce that Joe Nuñez must have been thinking about RETURN FIRE for a long time, because this band seems to have arrived fully formed, devoid of cliché and supremely equipped to remove people's faces. In and out in an admirably succinct 34 minutes, "Return Fire" sounds like a debut album made by young, hungry diehards, rather than road-weary veterans. And maybe that's the point: now free to pursue his own vision, Joe Nuñez has started from scratch and decided that metal should be loud, fast, full of character and really fucking exciting. Really, there's nothing not to like here.