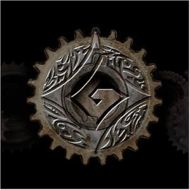 Despite the ever-presence of moonlighting SLAYER man Dave Lombardo, and as much as they may have claimed to be pushing the envelope of thrash, GRIP INC. have never made anywhere near the impression they would've liked to. And with vocalist Gus Chambers on the verge of leaving over creative issues a couple of years back, this multinational unit needed to start thinking beyond the realms of fair-to-average riff-making. Either that, or show the Mohawk-topped Englishman the door and install a new frontman.

Finally, after three previous attempts, "Incorporated" is the first full-lengther where they've really started thinking outside of the box — and Chambers is still lurking up front. In all honesty, pretty much anyone these days can do shimmering Eastern-style acoustics and, if they put their mind to it, tuneful electronica in the mould of NINE INCH NAILS/FRONT LINE ASSEMBLY. But when the opening two tracks, "Curse (Of The Cloth)" and "The Answer", opt for a bit of both, they do it surprisingly well mixed in with catchy SLAYER-esque riffing from Waldemar Sorychta. Well enough to be considered as songs that might linger in the memory in fact — and who'd have ever thought that about music attached to the name GRIP INC.?

"Prophecy" is a song that opens itself as wide as Sorychta's big and intensive production will allow, bringing to mind comparisons with STRAPPING YOUNG LAD at their brooding best and NEVERMORE when they also stopped just being another band living on clichés and began to blow minds to a degree. And even when they're on a roll and opt to jump back on the SLAYER train on "Skin Trade", the overlaid sitar moments (courtesy of KREATOR's Sami Yli-Sirniö) make all the difference.

Alas, "Incorporated" is such a step up in quality for the first six songs that there had to be an inevitable slide at some point. As "(Built To) Resist" fades out on a tediously mechanical riff and "The Gift" gets all dull darkwave to the degree where you yearn for sunlight and joy, this is the cue for the trio to cunningly slip back into the not-so-great GRIP INC. of old on the album's most vapid and generic track, "Privilege". "Man With No Insides" has a stab at rescuing the latter half of the album with its passable chugging approach, but rather amusingly falls down because Gus Chambers appears to be barking primarily about the shortcomings of the "King of Pop". Yes, indeed — a song based around Michael Jackson.

Consistency is clearly the key here — as with many other bands — and now that they've proved that they can rock convincingly for sixty per-cent of the time, once and for all we'd like the full GRIP stranglehold next time around please.