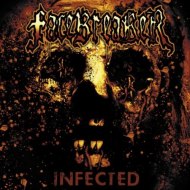 It makes sense that Sweden's FACEBREAKER would make the leap from Pulverised to Metal Blade considering that the latter could benefit from the addition of some Swede-death of a more traditional kind and that the band is just good enough to offer appeal of a wide variety. That doesn't necessarily mean that "Infected" has positioned the breakers of faces to claim a position of roost-ruling in the world of buzz bombs and two-beats either. What it does mean is that if JUNGLE ROT played old-school Swedish death metal that was updated for modern production values the result might sound like "Infected" in that groove-worthiness, ease of digestion, and reliability/predictability is paramount, even if appeal duration is limited.

While 2008's "Dead, Rotten and Hungry" rang most of the right bells and offered enough weight to sink a freighter to the bottom of the ocean, it didn't really distinguish itself from the pack. "Infected" has distanced itself to a certain extent from that assessment, as it is a better album from a songwriting and production standpoint. The fine tuning comes in the way of increased emphasis on conventional format, thereby assuring ease of recall. More noticeable is the fact that aside from the last few songs, the track sequencing is such that an up-tempo number is followed by a slower, usually mid-tempo, cut, which isn't a problem; it's just a characteristic that jumps out. As it turns out it is the measured crawls and menacing plods ("Epidemic", "Into the Pit", and the excellent "Cannibalistic") that are most memorable, not to mention awfully damn menacing. The quicker fare is solid, if less distinct, the marginally more dynamic "Waiting for Pain" notwithstanding. Roberth Karlsson's roar is intelligible and tends to be more commanding than the average Swede growler and is easily one of the band's strengths.

Opting for more of a muscular, modern production that highlights precision and clarity over frayed edges and Sunlight buzz (though the ugliness is retained) pays off in terms of wallop packing. I've no reservations about recommending "Infected" to most diehard fans of Swedish death, as its gnarly-bastard qualities are in excess of acceptable and its girth sufficiently sizeable. Drag does set in during the final fourth of the affair and, depending on your point of view, predictability becomes a minor concern. As such, you probably won't be reading about "Infected" on any death metal year-end lists. Otherwise, there isn't a lot about which to complain and most other criticisms will probably be heard from those of self-professed refined tastes and uptight personalities.