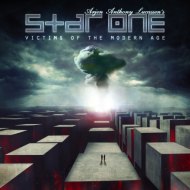 Victims of the Modern Age

How about giving it up for Arjen Lucassen? The versatile, multi-talented musician hit the target dead center with "Victims of the Modern Age" by assembling a star-studded cast and making an album that flirts with the progressive in all the right places, but always stays rooted in the fundamentals of melodic metal, power of otherwise. That is a praiseworthy accomplishment, especially when one considers the dizzying heights of expectation set for the man every time he begins work on a new project.

Pardon the lifting of hyperbolic statements from the printed pages of a press release, but I can't help but highlight the statement about "Victims of the Modern Age" being an album that is "loud, heavy, and anything but subtle" as a most poignant one. Beyond the excitement generated by players like Ed Warby (AYREON, HAIL OF BULLETS, GOREFEST),keyboardist Joost Van Den Broek (AFTER FOREVER),and vocalists Russell Allen (SYMPHONY X),Tony Martin (ex-BLACK SABBATH),Dan Swanö (you know the list),and Floor Jansen (ex-AFTER FOREVER) is that "Victims of the Modern Age" is a bad mofo because of gargantuan riffs, a powerful rhythm section, and hot-shit keyboards that don't so much support the sweeping melodies as give them a swift kick in the ass.

What is most obvious is the care that Lucassen took to make "Victims of the Modern Age" a complete and utterly captivating affair. No caulking or crack sealants of any kind, the album's building envelope is musically airtight from top to bottom and side to side. "Digital Rain" is the first proper tune that hits like a ton of bricks for reasons previously explained, not the least of which is the addictive chorus and slamming quality uncharacteristic of the tunes heard on 2002's STAR ONE launch "Space Metal".

And the intensity never wanes. That even includes a song like the gripping "24 Hours", which may burn slower, yet the passion and fury involved makes it anything but relaxed. Regardless of the angle from which it is viewed, "Victims of the Modern Age" is jam-packed with hot-rockin' bombast that and covers ground travelled by everyone from RAINBOW (JLT era) to SYMPHONY X to PAGAN'S MIND, yet is just as distinctly Lucassen.

Those accolades for retention of high intensity levels won't be hard to believe once you hear a guy like Russell Allen belting it out on the up-tempo "Human See, Human Do", which punches hard with a swinging riff and blazing keyboard work. It also another example of Lucassen's wise move to involve the numerous vocalists (also inclusive of THRESHOLD's Damian Wilson) in more of an all-encompassing manner, which results in far greater cohesion at the album level.

You can quibble all you'd like about whether the first word should be "progressive," "power," or "melodic, but what is most notable about "Victims of the Modern Age" is the "metal" part. You will without doubt whistle the melodies while you work, but it is the soreness in the ass from all that kicking that will be foremost on your mind when it is all said and done.