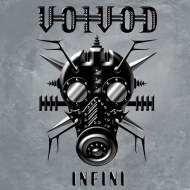 With the death of beloved VOIVOD guitarist Denis "Piggy" D'amour, the world lost one of its most visionary axemen. Honoring one of his last requests, his bandmates retrieved files full of riffing from his laptop, and painstakingly cobbled songs together from the raw, unfinished guitar tracks. Anyone with a passing knowledge of rock recording, where the drums always go first, will understand what a difficult undertaking this would be, even without the emotional weight of having lost a friend and comrade-in-arms.

Thus, it's remarkable that "Infini" (and its predecessor, 2006's "Katorz") exist at all. Given the circumstances, it makes it really, really hard to say a contrary word about the record (and if you're a shameless and slavish VOIVOD fan, like I am, it makes such blasphemy even more difficult). Luckily, while "Infini" is an uneven record, it's definitely got enough of VOIVOD's signature latter-day brooding, proggy hard rock to please the faithful, and those are pretty much the only people buying VOIVOD records in 2009, so no boy-do-I-feel-like-shit-about-this hatchet job is necessary.

It was looking grim, though, with one of the album's weakest tracks, the lackluster "God Phones", inexplicably picked as the opener. The problem, here and elsewhere, isn't always Piggy's riffing, but a general lack of inspiration in the rest of the players — particularly on the part of vocalist Denis "Snake" Belanger, who's reduced to half-heartedly doling out lines like "came to rock and roll / came to steal your soul" and "you're filling my head / with krap in my head" (from the otherwise decent "Krap Radio"). His low point comes during "Earthache", where the riff is fine, Jason Newsted beefs it up with a cool bass part, and then Snake mumbles, for a chorus, "blah blah blah, is that all you say?" Is that all you have to say? Really?

But for a good chunk of "Infini", the band continues where they left off on "Katorz" — simpler, stripped-down verse-chorus-verse rockers with a wide array of emotions and moods conveyed by the rumbling thunder of Michel "Away" Langevin's drumming and Piggy's unorthodox chords and notes. Exuberant raveups like the hard-driving "Deathproof" and the hypnotic, galloping album closer "Volcano" play well next to wistful, moody tracks like "Treasure Chase" and the angular, cranky "Pyramidome". The dark and plaintive "A Room With a V.U". comes close to capturing the technical, isolated atmosphere of the "Nothingface" era, while "Destroy After Reading" is a seething, bare-bones tale of paranoia that recalls KILLING JOKE at their most metallic and claustrophobic.

So, at the end of the day, is it the VOIVOD record you'd play to initiate someone into the Iron Gang? Is it the VOIVOD record you'd take to that hypothetical desert island if you could only pack one? Of course it isn't. You knew it wasn't going to be, and I doubt the surviving band members would try to tell you otherwise. What "Infini" represents, though, is part of why VOIVOD was and is such an important band — a triumph over painful adversity, a promise fulfilled to a fellow traveler whose journey was unfairly cut short, and another weird, proud hoist of the freak flag from a band whose very off-putting idiocyncrasies forged such a strong bond with the few of us who got it. Those who care won't buy "Infini" out of some sense of reluctant duty, although we would, if it came to that. Despite its necessary limitations, it's still got plenty of that deep-freeze outer space quantum mojo that, in one mutated form or another, has been knocking us on our asses for over twenty years.