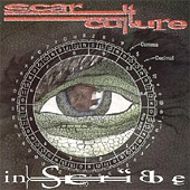 Formerly known as SCRAPE (not to be confused with SKRAPE),New York death metallers SCAR CULTURE are a fairly derivative-sounding yet ferociously powerful act whose approach brings to mind all the best elements of DEICIDE, MORBID ANGEL and NAPALM DEATH, all rolled into one face-rippingly heavy package that is as aggressive as they come. Impressively produced by S.O.D./M.O.D. frontman Billy Milano at his Blue Meenie Studios in Hoboken, New Jersey, Inscribe is a musically complex affair that is full of sharp twists and turns without ever letting up in the intensity stakes, featuring an incredibly tight delivery that is usually reserved for far more established and experienced outfits.

As is the case with a lot of the other death metal acts, SCAR CULTURE's biggest obstacle lies in the fact that most of their musical output has an air of familiarity that is only marginally offset by the group's undeniably convincing execution, with many of the band's compositions sounding virtually interchangeable amid a sea of dizzying riffs and double-bass drums that constantly—and quite effectively, I might add—attack the senses.

A death metal fan's delight, Inscribe will not reinvent the wheel, and it is certain to be dismissed by the more jaded of listeners as a rehash of past glories. In spite of this, SCAR CULTURE's amazingly brutal brand of “American”-style death metal is every bit as crushingly heavy as that of any other act that has come before them, and the group's debut CD (which includes as a "bonus" a death metallized version of FAITH NO MORE's "Surprise! You're Dead!") serves as a potent introduction to what is likely to be a healthy and productive long-term career.