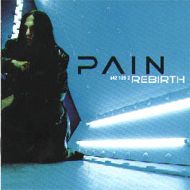 Having established a name for himself as the leader of the acclaimed Swedish death metal act HYPOCRISY, in addition to being the producer behind such groups as DESTRUCTION and DIMMU BORGIR, Peter Tagtgren is undoubtedly a multi-talented individual, and PAIN is possibly his finest achievement to date. Although this is technically the group's second full-length album (the group's eponymously-titled debut was issued through Nuclear Blast Records in 1997),Rebirth is, just as the title suggests, a new beginning for the group and a much superior offering to its predecessor. Featuring a musical direction that Tagtgren has described as "a mixture of METALLICA and (the Swedish Eurodance outfit) E-TYPE", Rebirth is in reality a more aggressive release than the abovementioned description would suggest. At times coming across like a more melodic ROB ZOMBIE (i.e. "On and On", "Crashed"),PAIN is a relatively unique-sounding affair that covers a wide spectrum of textures while focusing firmly on delivering crushingly heavy riffs over some bouncing rhythms that are guaranteed to get the crowds moving. Excellent!