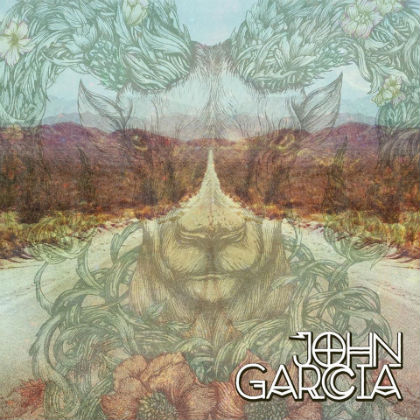 John Garcia's a busy hombre these days. The former KYUSS/HERMANO and current VISTA CHINO and UNIDA vocalist wastes no time throwing a solo album into the market while his iron's red-hot. What you might expect in the way of stoner and psych-out jams is what Garcia gives you, but it's not entirely KYUSS-driven.

"My Mind" chuffs away with Garcia grumbling about the haunts inside his personal headspace and demanding to be left alone to sieve through his brain stew. The whumping riffs are straight-up stoner and some sloppy bass chops (hopefully mucked up on purpose) create a membrane-wracked cadence rattled by the more straightforward rock jive of the goofy titled "Rolling Stoned". This time, the bass parts are glued tightly behind the shucking chords and buzz-drenched front guitars. It takes a minute-and-a-half before Garcia's voice manifests and with added reverb to his mix, he sends out the shivery edict "I'll kill you if you leave me". Inspired perhaps by a bad trip or a bad headline, there's a subversive anxiety trembling behind the striding march of "Rolling Stoned" that hints at future gloom on this album. Fortunately, the moodiness continues only for a bit longer before Garcia turns on the jets in a big way.

"Flower" rolls along with a booming drone of interchanging chords as it maintains a hard edge on the verses. Appositely honeyed guitar lines are poured on top and together they build to a massive chorus. Garcia slides and shrieks with a cloudy hiss behind the song's fuzz nuggets. "The Blvd" kicks back on its laurels with lazy, drawling chords and a steady, dropped-down tempo before jacking things up with sonic gushes on the choruses, even if the first eruption ends up being a wordless fake out. Garcia smoothly burrs behind it all and when he does strike the chorus, it's a killer payoff.

"5000 Miles" is a real ass-kicker with its slammed-down riffs and catchy groove while Garcia continues to prattle briefly about the voices in his head while finding his way through the proverbial desert dust that has been both ally and muse for his music. At least the voices are pointing him in the right direction. "5000 Miles" is one of the best stoner rides ever, and that's not superfluous hype. The challenge is upon you not to bob along to it. For that matter, the same test applies to avoid shaking a tail to the terrific boogie rock humps of "Saddleback" and "All These Walls". John Garcia is brilliant for holding those two high energy gems toward the end of this album.

Where "5000 Miles" treads from the desert, "Confusion" jumps into to the mud with a grubby, static-laden intro that the SONIC YOUTH goo crew would appreciate. The song stays absolutely filthy with murky distortion while Garcia trades off with clean vocals containing no filters or even wails. It's a shrewd strategy set against the other tracks. It sets up the poised strut of "His Bullets Energy", countered at the end of the album by "Her Bullets Energy", the latter featuring a guitar cameo by none other than THE DOORS' Robby Krieger. The "His" selection rides upon the heft of buoyant alpha strums and bass pokes that jive along with the song's systematic drumming. Appropriately, the "Her" installment is filled with tender omega effervescence and tiding acoustic plugs for Garcia to croon along to. Hitting a flamenco-driven solo section, the jam with Krieger must have been as satisfying to record as it is to behold.

When you're good at what you do and your audience all but pre-select, there's not much else required stepping into a solo project beyond what John Garcia brings to the table here. Not that Josh Homme has much to be envious about given his elevated position in rock music, John Garcia is, in modest fashion, usurping the last of Homme's street cred with each new release. Without overtly making a last-man-standing KYUSS record, John Garcia smacks it down on this record and, along with VISTA CHINO's "Peace", throws the grit back into what has been dragged kicking, screaming and defiantly toking into the mainstream.