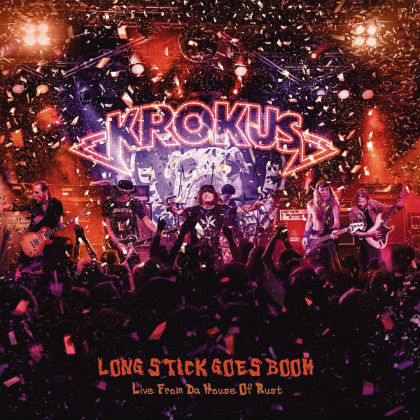 KROKUS have taken their lumps and enjoyed their fair share of fan loyalties as well, but for all of the "AC/DC clone" tags that have followed them four decades strong, "Krok 'n Roll" perseveres, dig it or not.

At this point having played more than two thousand performances over five continents, KROKUS have no one to answer to but those who show up for their gigs. That being said, KROKUS celebrates forty years with a homecoming show where they began in Solothurn, Switzerland, culminating in their sweaty new live album, "Long Stick Goes Boom: Live From Da House of Rust".

Considering the sizable catalog KROKUS has, their cover of THE GUESS WHO's "American Woman", which appeared on their "One Vice at a Time" album (along with "Long Stick Goes Boom") is slightly disappointing when "Midnite Maniac" would've been preferable, or at least their bitchin' cover of SWEET's "Ballroom Blitz". Nonetheless, KROKUS (including second guitarist Mandy Meyer and recent drummer Flavio Mezzodi) has their audience well within their grip four songs deep and nothing ever goes slack between players and guests.

Very much welcome on "Long Stick Goes Boom: Live From Da House Rust" is a hefty portion of early KROKUS material, gathered from 1980's "Metal Rendez-vous" (notable as Storace's KROKUS debut album) and 1981's "Hardware". You get "Fire", "Tokyo Nights", "Heatstrokes" and "Bedside Radio" plus "Rock City" and "Easy Rocker". "Tokyo Nights" and "Easy Rocker" are played with huge conviction and they serve as much a reminder as their calling card "Screaming in the Night" that KROKUS had more songwriting prowess than merely reinventing the Young brothers' wheels.

Otherwise, the set on this program is comprised of recent era songs like "Hoodoo Woman" from "Hoodoo", "Hallelujah Rock 'n Roll", "Go Baby Go", "Dog Song" and "Better Than Sex" from "Dirty Dynamite" and the title track from "Hellraiser".

Marc Storace, as ever, sounds like he's in full defiance of time and he's having a ball at this concert, revealed by his quick "Pinball Wizard" interplay in the midst of "Long Stick Goes Boom"'s jam portion. The guitar solos on "Fire", "Heatstrokes" and "Easy Rocker" are glorious and they garnish piercing whistles of approval from the crowd as much as Marc Storace summons by calling Switzerland "the rock capitol of the world." KROKUS sells their claim by delivering an energetic, honor-bound set on "Long Stick Goes Boom: Live From Da House Rust" that even their critics can cut some slack for.