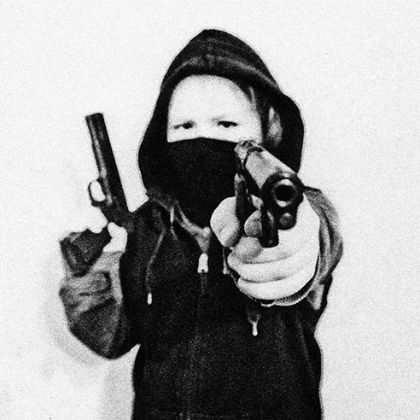 One would expect a music entity called BLITZKRIEG BABY to be a fun punk romp in the vein of the RAMONES, but abandon hope now. One look at the frightening cover photo of the "Kids' World" EP pulls a dank shade over that prospect. Instead, BLITZKRIEG BABY throws recent high school, college and mall shoot-ups by young assassins, the stark reality of child abuse and even "The Hunger Games" series back in the world's faces. Kim Solve, mastermind behind BLITZKRIEG BABY, delivers churning coldwave and disarming industrial tones to amplify his harsh and pessimistic views about the world today as his bloody preamble the next generation is fucked. Nothing really quantifies as metal here, but "Kids' World" is nearly as upsetting as STALLAGH with its discomfiting nihilism, paranoia-inducing loops and ordinal tone abrasions. You will feel inexorably raw after confronting this EP.

The hapless title track plods with gloomy, echoing ostinato and an equally disconsolate digital rhythm, capped by quasi-Hollywood scoring courtesy of the Kim Solve's nerve-wracking synths. Solve posits that irresponsible norms and mores of modern society have groomed the youth of today to become hate-filled murderers. His indictments and charred metaphors include "rape rallies," "bodies bleeding out from swing sets in the public park" and the "crackle of screaming human bonfires." It doesn't get any lighter the rest of the way.

"Those They Could Not Fuck, They Killed" is devoid of vocals, much less a soul. The chilly atmospherics are oppressive and horrifying, the equivalent of being trapped inside a cylindrical prison with no hope of breaking out. The repetitive strikes of the track sound like futile banging for escape, an escape that only comes if you turn the album off. No less encompassing is "Broken Child", which clobbers with electronic reverb reminiscent of the jai-alai-Pong-merged game of death in the original Tron. Solve spills a shivery lullaby amidst the flogging pace of "Broken Child", which could very easily be interpreted as whipping.

Choppier in the vocal delivery, Solve heaves anti-rap into the scraped and scratchy loops of "Half Pig Half Man", while taking "Children in Uniform MMXIII" to sordid places even Trent Reznor won't dwell. On the base of sampled rolling snare marches and a bobbing synth melody, you can't help but think of NINE INCH NAILS along the way. Ditto for "Your Happy Place", perhaps the most agreeable track to be found, if anything on "Kids' World" can be considered agreeable.

Whatever dreadful source Kim Solve draws from to create this awful, will-stripping hubris (as in the Greek connotation) may come from personal affliction or he must be so attuned to the barbaric underbelly of society, dismal art of this nature seems preordained through him. "Incinerator Symphony" is mortifying with its amplified pulse ricochets and retorting synth tones, but it's strangely so well-conceived it belongs in a horror film. Thus "Kids' World" is only recommended for a certain breed of listener who either relates to Solve (woe be unto you all) or one in search of a primal yet inorganic media score for a presumably sadistic film project. Again, woe be unto you all.