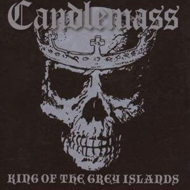 King of the Grey Islands

How do you judge the second post-comeback album of a band as revered as CANDLEMASS, especially when they've lost their beloved and iconic vocalist (again, and probably for the last time)? It's obviously a record made under duress, with a lot of pressure, given the success of the band's return. Is "pretty good under the circumstances" good enough for a band whose entire discography is a benchmark for quality metal? Should we just be happy the band still exists? And would it be fair to give a bad ranking since "pretty good" CANDLEMASS still mops the floor with just about everything else out there?

Tough questions indeed, as we're faced with an album that — while solid and enjoyable — definitely seems a bit rushed and thrown-together compared to the 2005 self-titled comeback. It takes a few listens to really sit well, too, since new vocalist Robert Lowe's distinctive tones are so instantly identified with the sound of his other band, the long-running SOLITUDE AETURNUS. Given the phrasing and the lyrics, it's hard to not imagine the recently-departed Messiah Marcolin belting these numbers out — and thinking about personnel shifts makes it harder to suspend disbelief and immerse oneself in the mood of the album.

But put the time in, and give it a few chances, because "King of the Grey Islands" will definitely reward your persistence. It is rushed, and it doesn't have the same earth-moving vibe as the self-titled album. But it's dripping with doom pathos, and Lowe's slightly demented persona adds plenty of personality in the absence of Marcolin's usual enjoyably hammy performance. The music is simple, basic almost to a fault, which gives Lowe more opportunity to put his stamp on things and thus, makes the whole affair a little grittier and more wild-eyed than one might expect.

Lowe really gets to roll his eyes and freak out on the insistent "Demonia 6", while on the otherwise-pedestrian "Of Stars and Smoke" he delivers a surprisingly smooth, catchy chorus that'd probably help CANDLEMASS cross over to some of the more power metal and hard-rock-minded European fans. And if any of this makes you feel uncomfortable, as if someone took your doom away, just feast on the end of "Destroyer" or the glorious slab of thick guitars and spacey weirdness that is "Man of Shadows" — a transitional record this may be, but CANDLEMASS hasn't forgotten how to lay down the mournful mountains of groove and send chills up the spine with a few well-placed words.

If anything, Lowe has showed up for this record full of the same fire and brimstone he brings to the best SOLITUDE work — it's the songs themselves that seem to lack a little, skeletal constructs that sometimes seem to barely be riffs at all, at times merely serving as a framework for the vocals and conveying no dread or excitement. All is forgiven, though, when the band launches into genuinely harrowing closer "Embracing the Styx" — everyone finally comes together and gives 100% to the cause, and the result is a churning, roiling spooky and multilayered clarion call that echoes down the mountainsides and strikes fear in the hearts of mortals.

It's striking how you can kinda see the seams showing here, arguably more so than on any CANDLEMASS album in the band's turbulent history… and yet, the results are still so satisfying (and, in the case of "Embracing the Styx", downright fucking classic). It's almost scary to think what the Lowe-led band will come up with when they've had a few months to catch their breath and actually, like, gel together. For now, we've got "King of the Grey Islands", a fine album in its own right, and one that – despite its minor flaws – should silence most naysayers and launch the next phase of their career quite nicely. CANDLEMASS lives!