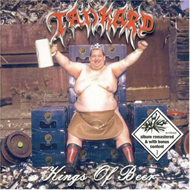 Germany's beer-swilling, fart-smelling, fat and happy drunken thrash jokers should need no introduction to any old-schooler worth his denim. While many in the 1980s would have probably predicted a short shelf life for TANKARD and their lowbrow antics, the band has lasted for twenty-five years now (!),because they've always backed up their goofy lyrical outlook and irreverent attitude with some serious thrash metal chops. "Kings of Beer", their 2000 set finally seeing U.S. release this year, is a sterling example of the band at their best — speed-metal singalongs with plenty of gross humor, catchy hooks and nimble razor riffs.

Vocalist Gerre has always been the amiable master of ceremonies, his Mille-like charismatic thrash shout developing its own twisted brand of melody and snarl over the years. He's never shy about embracing topics near and dear to the band and its fans — be it cannibalistic hot dog vendors, the heartbreak of wet farts (the subject of opener "Flirtin' With Desaster"),or the main reason for the party, good old fashioned beer.

Occasionally, "Kings of Beer" is a mixed bag — the title cut is a slow, plodding stormer for the most part, while "Land of the Free" and "Talk Show Prostitute" flirt with a bleaker tempo and more serious subject matter (with mixed results — I don't need to hear TANKARD excoriating the United States any more than I need to hear Americans who've never left their hometown mindlessly bashing Europe, and it's hard to take social commentary seriously from a guy who was singing about shitting his pants a minute ago). For the most part, though, the band's on full throttle with the thrash polka beats and biting riffs, usually only varying things with a catchy little midtempo intro or bridge (see "I'm So Sorry!"). While it's easy to criticize a band for being formulaic, the fact remains that TANKARD are at their best at autobahn speed, Gerre ranting over simple, headbanging riffage that'd probably be considered punk rock if the guitar tone wasn't so damnably, awesomely chunky and thrashy.

TANKARD's overt buffoonery will forever make them no bigger than a novelty act, but their diehard thrash and utter refusal to grow up will make them heroes to their particular drunken cult, and deservedly so. "Kings of Beer" is one of the better late-era albums from this alcoholic rugby team of a band, arguably right up there with their 80's classics, and it's ample proof that fat, drunk and clever (and clever they are, though they'd probably chuck empties at you for saying so) is a perfectly okay way to go through life. (The reissue contains a cover of METALLICA chestnut "Damage, Inc.", to which TANKARD gives a fairly straightfaced homage — except, of course, for the bottle opening at the beginning and the belch at the end).