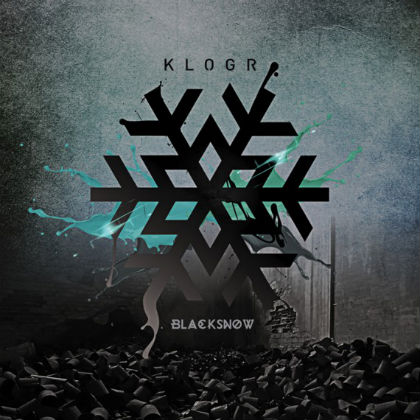 Pronounced "kay-log-ar," this Italian proto power ensemble lead by Gabriele "Rusty" Rustichelli is reputedly, in their modest way, on a mission to shine global awareness to the worldwide obtuse. The name KLOGR refers to Weber and Fechner's psychosocial laws related to stimuli and response. While solicitous in their intent, what KLOGR delivers on their second album "Black Snow" is unfortunately a repetitive, mid-tempo AOR wannabe album. At least the band reveals some nice chops along with their headstrong missive that mankind needs to check itself.

The opening number "Zero Tolerance" is mostly an ass-kicking riff machine given a lot of amp from its hard groove and a major league guitar solo. Unfortunately, it presents the only real variation on "Black Snow" and therein lies the problem with the album.

"Refuge" isn't a bad mid-tempo rocker, but it sets the precedence for the remainder of "Black Snow", which is to say, nothing else slams as much as "Zero Tolerance". "Draw Closer" crawls along and tries to dress up what is a standard proto jam in disguise, never really producing any real sense of urgency. By the time Rusty Rustichelli starts dropping f-bombs all over the chorus, it sounds cheap, as all the profanity on this album does. There's nothing KLOGR pushes to the hilt musically to substantiate their random cursing and unfortunately, it drags their credibility down.

"Hell of Income" hardly picks up the pace, but some sharp harmony occasionally breaks into the otherwise prosaic roll and blunt screaming through the song. "Guilty and Proud" teases by jacking up the riffage in the opening and on the choruses, while peddling unhurriedly on the verses. The wistful ballad "Heart Breathing" is set up well, but it soon woos radio program directors instead of the listener directly. At least the attractive and gentle closer "Ambergais" has everything required to make it stand out from all the replication preceding it.

Considering KLOGR has three guitarists, the songs don't always carry the cadence befitting of a triple attack. Mostly Rusty, Eugenio and Giampi are seeking aligned, dense tones, though sometimes you can hear the guitars break away just long enough to detect them individually. Admittedly, there's some nice harmonizing and layer work on the bridge of "Refuge", which temporarily gets away from the song's primary chug. The band does have enough smarts to apply the same theory throughout the album. Since most of KLOGR's songs are dependent upon agro riffs, however, the embellishments are mere sprinkles drifting overtop the constant, analogous chord strikes.

A gross lack of dynamic is what kills "Black Snow", unless this is a vibe that suits you as a listener. However noble KLOGR's concern about humanity's often errant thought processes may be, the message is sacrificed by their redundancy. They can set up a song well, they can pound riffs in their sleep and they can embroider in the appropriate spots, but otherwise, Gabriele Rustichelli's pleas for social change get lost within his band's wilderness of mediocrity.