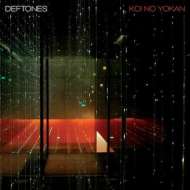 On their previous album, "Diamond Eyes", the DEFTONES turned more than a few heads for reinventing a few of their crunky wheels. Dynamics were a large part of that album's success, making it one of the DEFTONES' most crucial releases along with "White Pony" and "Around the Fur". This year, they come back, not with the long-speculated, secretive "Eros" album their fans have been begging for, but "Koi No Yokan", an album that comes off as a decorative appeasement, or at least a stalling piece to a reported magnum opus still in-hiding.

"Koi No Yokan" is a mature and alluring blast of textural angst metal that appeals more to the subconscious than the overt, since what's on the front of the DEFTONES' latest work goes back to the same crunky wheels of the past. This album benefits from expressive platitudes of shoegazing alt, more so than ever before. Otherwise, the DEFTONES would've given their fans another "Saturday Night Wrist" or the 2003 self-titled album and that would've been a total cheat.

While there's a slight disappointment to "Koi No Yokan"'s option to settle for the stationary crank and crawl measures that nearly buried the DEFTONES prior to the bolstering shake-up of "Diamond Eyes", it's the subliminal touches beneath Stephen Carpenter and Sergio Vega's pummeling crunch chords, Frank Delgado's dream-a-rama semiconductors and Chino Moreno's throttling swills that makes this an engaging listen. Carpenter frequently executes gorgeous, pensive melodies on "Entombed", "Rosemary" and "What Happened to You", plus spectacular intros to "Leathers", "Goon Squad" and "Tempest". It's all so easy to check out and surrender to what he lays down like a welcome mat before a swirling nebula. Carpenter's solo on "Swerve City" nudges you smack into that nebula and it's an electrifying passage.

Chino Moreno's vocals have come within reaches of the divine between "Diamond Eyes" and now "Koi No Yokan". He's seductive, sentimental and pre-climactic all over the place on this album, in particular on "Romantic Dreams", "Entombed" and "What Happened to You", the latter being the most personable step-forward from all of the DEFTONES' familiars dotting this album. Only in a few spots does Chino release the hounds as he did on the explosive "Rocket Skates" from "Diamond Eyes" ("Goon Squad" and "Leathers", for example) but honestly, Moreno's sense of tranquility of "Koi No Yokan" is as much a pleasure trip as anything on this album.

Still, the bottom line is that "Koi No Yokan" dips backwards for some of the meatier chugs of "Adrenaline" and "Around the Fur" while reaching for something more quixotic they were only dabbling with prior to "Diamond Eyes". "Graphic Nature", "Poltergeist" and "Swerve City" on this album are total hijacks from the DEFTONES' coming-up years, yet they contain far more fills and disciplined groove than the DEFTONES possessed back in the day. The songs bounce between proto pump fever pitches and alienated, lovesick balladry, much as the DEFTONES have ever done. It's just wielded with more class and ear-tickling aquatics, leading the DEFTONES' listeners closer to their favored maudlin pastures tended by Robert Smith and THE CURE. This could've been the DEFTONES' answer to "Bloodflowers", (especially on the slow and ambivalent "Gauze") but whenever "Koi No Yokan" feels itself slipping too far into the mire, Chino Moreno wails instead of whines and the band weaves winding lines of escapist pleasure.

What "Koi No Yokan" lacks in evolution, the DEFTONES compensate by engineering a heady, spiraling and detailed redux. While there's still nothing remotely as gut-wringing as "Change (In the House of Flies)" from "White Pony", "Koi No Yokan" gets away with one by swimming in near-bottomless channels. This is the vibe of disaffection seeking to grasp onto something meaningful and in that near-desperation, there opens a door towards enlightenment. Hopefully that enlightenment is revealed in the enigma of "Eros"' suggested genius.