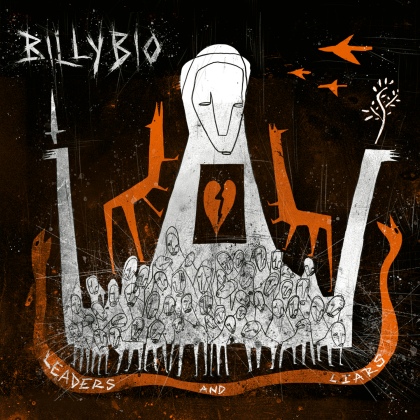 There are plenty of musicians out there who could reasonably be described as a force of nature, but few of them make music as naturally forceful, and therefore as convincing, as Billy Graziadei. Whether as co-frontman with BIOHAZARD or as six-string foil to Sen Dog in POWERFLO, the New Yorker always plays it like he means it, while writing songs that seek to untangle some of life's thorniest issues. In theory, BILLYBIO is a solo project, but as with 2018's "Feed The Fire" debut, the great man's second declaration of independence punches, snarls and spits with the same sweat-drenched, street-bound intensity that has informed the majority of his best work. Backed by a formidable line-up that includes SUICIDAL TENDENCIES bassist Roberto Diaz and THE EXPLOITED guitarist Robbie Davidson, "Leaders And Liars" is Graziadei's lockdown response, and seldom has anyone sounded more desperate to get out there and sweat blood for real.

Opener "Black Out" is a slow, heavy and straightforward starting point, with our hero in full street-corner polemic mode, and some of the hookiest thrash riffs Graziadei has written in decades. Therein lies the key to "Leaders And Liars": the last few years have plainly focused his mind and enabled him to incorporate all of his most cherished musical elements into one ferocious, streamlined whole. Long-time fans will be quickly sated by all the short, fast metallic hardcore moments and the bursts of feral punk rock, but this is as much a gritty but restless metal record as it is anything else. In fact, there is a world of difference between the thuggish beatdown grooves of "Fallen Empires" and the snotty, street-punk clatter of the title track, but everything flows beautifully, glued tight together with Graziadei's seemingly ageless spirit of defiance.

With 15 songs in 48 minutes, "Leaders And Liars" is all action and cheerfully bereft of brakes. "Lost Horizon" and "One Life To Live" are frantic crossover beat-'em-ups, custom built to incite riots in any venue. "Turn The Wounds" is a dark and moody curveball, tinged with the shadow of doom and the bleak throb of industrial. "Generation Kill" is half alt-metal anthem, half hardcore freakout. "Enough" is a satisfyingly savage metal-punk throwback; closer "Cyanide" blends big melodies with even bigger riffs and a smattering of warped electronics. Somehow, it all makes sense and it all sounds unmistakably like the work of that irrepressible chap from BIOHAZARD. The scary thing is, he seems to be getting even more passionate and energetic as the years go by.