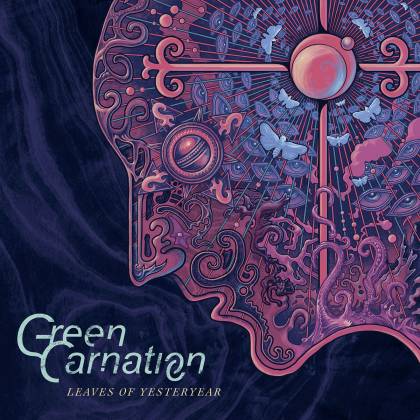 A whopping 14 years have passed since GREEN CARNATION's last release. A lot has changed since then, including a lengthy, six-year period during which time they were broken up following 2006's entirely acoustic affair "Acoustic Verses". They are virtually unrecognizable from their initial death metal format, having drifted through periods that touched upon styles as varied as death doom, prog doom, atmospheric goth metal and even dreary hard rock. The Norwegian act that was originally founded by Tchort — formerly of such nefarious acts as EMPEROR, BLOOD RED THRONE and CARPATHIAN FOREST — has returned and settled into a gothic prog metal format on "Leaves of Yesteryear", a solid album which is ripe with the qualities, dynamics and diversity that longtime followers would expect and crave.

The opening, title track is a representative cut of the album's whole. The goth and prog doom song is brooding, gloomy and filled with melancholy as it twists and turns through heavy metal crunch, and an emotionally downtrodden melodic outpouring. Kenneth Silden's keyboard work is integral in the expansive sound, and Kjetil Nordhus's strong vocals do a remarkable job of filling the space. "Sentinels" immediately follows in the same vein but with a much darker inclination, here the spirit of Norwegian black metal shines through, albeit on a subtextual, subtle level.

"Hounds" gradually builds up with soft acoustic parts prior to the onslaught of heavy metal histrionics, namely the burly riff that carries the song. This track builds upon the strong rhythm section of drummer Jonathan Perez and bassist Stein Roger Sordal. Their nimble interplay proves to be challenging and interesting throughout the album's entirety. "Hounds" is actually the only remaining original song on the album. After 14 years of waiting, fans were probably expecting more than three original tracks on a five-song release. But this is but a minor drawback on what is an incredible comeback record.

Ringleader Tchort and his cohorts round the excellent release out with a re-recording and fresh take on "My Dark Reflections of Life and Death", a track that was originally recorded on their 2000 debut album "Journey to the End of the Night", in addition to a BLACK SABBATH cover. Running at almost 16 minutes, "My Dark Reflections of Life and Death" is essentially this new album's centerpiece track just as it was on the debut. In its original form, the song was steeped in the essence of the gothic doom that defined the band's early period. This time around, they've trimmed the intro, tinkered with the arrangements, and performed the song with, not surprisingly, a greater leaning toward prog.

"Leaves of Yesteryear" concludes with the aforementioned SABBATH song, "Solitude" from "Master of Reality". The Norwegians play the classic song fairly closely to the original, maintaining it's tranquil energy yet almost exuding a folk music quality due to Nordhus's vocal delivery. The cover isn't essential nor exceptional, but it does provide a comforting and calm sense of closure to a remarkable comeback album. On "Leaves of Yesteryear", Tchort and company have focused on their strengths, and they seem poised to do even more great things ahead in the realm of dark prog metal.