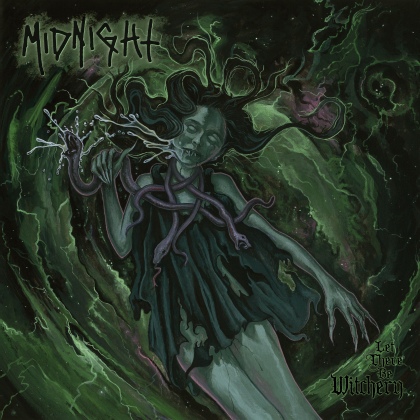 Let There Be Witchery

Cleveland speed demon Athenar, the one-man force behind the studio recordings released under the name MIDNIGHT, built that name in the decade following its mid-2000's formation by piling layers of sleaze, grime, and filth on top of blackened riffs cribbed from VENOM and MOTORHEAD's playbooks. This formula stayed in place through 2017's "Sweet Death and Ecstasy" with minor alterations here and there. MIDNIGHT made the jump to Metal Blade and its 2020 debut for the label, "Rebirth by Blasphemy", saw a major reduction in overt sleaziness. That resulted in tighter songwriting with the overall power of its blackened riff assault coming off as more sinister with the more prurient aspects of its previous lyrical focus taking a backseat.

MIDNIGHT's latest record, "Let There Be Witchery", has multiple moments where its creator shamelessly revels in the over-the-top salaciousness that fueled the lyrical mayhem of the project's earlier recordings. Song titles such as "Let There Be Sodomy" and "Szex Witchery", which Athenar himself states formed the basis of the album title for his latest full-length, would have fit on pre-Metal Blade releases. That said, the refined songwriting and riffcraft that was found on "Rebirth by Blasphemy" remain strongly abundant here. The welding of old-school sleaze and shock with the newfound refinement of tightly packing metallic mayhem has resulted in what may be the ultimate expression of what MIDNIGHT stands for in 2022.

Athenar reasserts his ability to craft uproarious collections of filthy guitar work from the album-opening "Telepathic Nightmare", and his vocal shouts are as caustic as ever. The rippers are plentiful, with "In Sinful Secrecy" and "Snake Obsession" doing his influences proud. The tracks contained on "Let There Be Witchery" are very firmly on the "heavy" side of heavy metal. What allows MIDNIGHT to rise above the dozens of modern acts belching out thrice-chewed VENOM worship is that Athenar has also mastered the art of the rock-solid d-beat drum sound that is ever so important to keeping the metallic chaos well-organized. He also knows the value of shredding guitar solos that drip with rock swagger. The latter is especially prominent on "Frothing Foulness" and "Devil Virgin".

The record moves along as a fairly speedy gallop, though when Athenar slows the pace down on "More Torment"'s, trudging stomp he does the "Morbid Tales"-era of CELTIC FROST quite proud. "Villainy Wretched Villainy" is a relatively mid-tempo cut compared to the majority of the record, but the track still drips with plenty of irreverent rock swagger with its catchy chorus

The renewed injection of lascivious filth back into some of MIDNIGHT's lyrical inspirations on "Let There Be Witchery" may seem to some like a slight step backward, but Athenar's ability to wrap that within the well-honed and finely focused songwriting formula of 2020's "Rebirth by Blasphemy" ultimately results in what may be the most purely MIDNIGHT release yet. It's sleazy and at times a little icky, but it is also incredibly catchy.