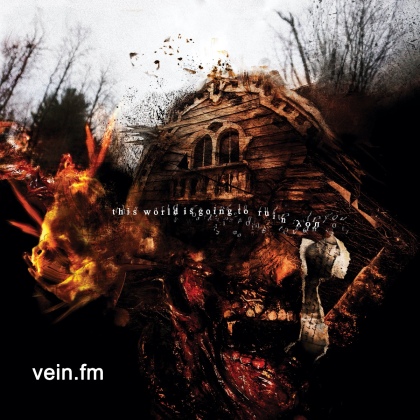 This World Is Going To Ruin You

Playing VEIN.FM's "This World Is Going to Ruin You" is like turning a dial and tuning your brain to a new frequency, somewhere between one channel and the next. It's the brief white noise that blares in your ears; the one that some people say hides traces and whispers of the paranormal. The band's second full-length record is hellish, disorienting and haunting in ways that pick at the unconscious mind, and, by the end, have the listener asking of the feeling: "What was that?"

The record opens with a muffled, shaking female voice saying, "I can't sleep now." So begins a barrage of the chaotic hardcore that first appealed to fans on the band's debut album, "errorzone". The single "The Killing Womb" is the brash, ferocious headbanger that will no doubt fuel all of their mosh pits in the near future, with the lyrical inflection point: "Take cover/ There is a killer inside this place!" The songs that follow, from "Versus Wyoming" to "Lights Out" to "Hellnight" (featuring Jeff Smith of JEROMES DREAM) all rely on a similar splattering of relentlessly changing time signatures, ravenous unclean vocals, dissonant chords and eerie sound clips. Of course, "Fear in Non Fiction" will be a cult favorite for the fact that it features THURSDAY vocalist Geoff Rickly. "Magazine Beach" offers a slightly more traditional, even catchy song structure; a welcome flagpole in the sand.

There is a ruminating darkness throughout "This World Is Going to Ruin You" that lends itself to horror movie soundtrack material. It builds significantly in the slow burn of a song that is "Wavery", and ultimately culminates in the mysterious and highly artistic final track, "Funeral Sound". There is so much contained in this fascinating 7-minute song — from solemn, icy piano to voicemail to deafening static to a bludgeoning, full-band return — that it could easily be its own EP.

With VEIN.FM, it is very possible to listen to the same songs one hundred times and hear something new on each pass. Their intentionally lo-fi, noisy recordings and deliberately schizophrenic style can be rather dizzying, but that's precisely the point. Giving their records more structural anchors like "Magazine Beach" and "Wavery", though, would make future releases slightly more digestible, and all the more successful.