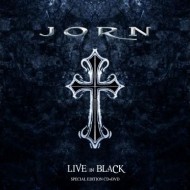 Always wondered about all the fuss over this Jorn Lande fellow or were curious about the quality level of the material on his eight studio albums? Then "Live in Black" is the album — make that a double-CD/DVD combo — for you since it offers a nice cross section of music from a band called JORN. We've not even scratched the surface of the guy's varying degrees of involvement with the likes of MASTERPLAN, ARK, MILLENIUM, Russell Allen, and AVANTASIA, to name a handful. Between that and a scheduled trip to Bed, Bath & Beyond I don't know if we'll have enough time. As such, we'll focus on the matter at hand, this smokin' double-live CD recorded at Sweden Rock Festival; sorry folks, but there nothing to report on the DVD since it wasn't part of the promo package.

Not only has Lande earned the respect of many for his numerous contributions to and achievements in the world of metal, not the least of which was an invitation to perform at the final HEAVEN & HELL concert in London, he's taken his proudly admitted influences and put them to good use in the furtherance of this beloved genre. As for the main influence, pick damn near any track — besides the guitar and drums solos — and you'll hear the Ronnie James Dio influence at deafening volume. Lande proclaiming that "Ronnie James Dio is the man" during "Man of the Dark" and his borrowing of several lines from RAINBOW's "Man on the Silver Mountain" during nine-minute finale (and all-around righteous tune) "War of the World" aren't exactly subtle hints either. But the song selection of "Live in Black" is more than just DIO-esque (the chunky march of "Road of the Cross" and the tough as leather "Spirit Black" two of the most obvious examples),it is the stuff of quality melodic hard rock (e.g. "Rock and Roll Angel") and a brand of traditional heavy metal that is classy and brawny at once. Perhaps the most ass kickin' example of the latter is "Stormcrow".

Most importantly, it is no chore making it through two CDs worth of JORN solo material, one indication of consistently good songwriting. Ever the team player, Lande even shines the spotlight on guitarists Tore Moren and Tor Erik Myhre who each take the "lead" during each of the tracks listed as "Guitar Solo", but are more accurately described as instrumentals with a lead-guitar focus. The Willy Bendiksen drum solo is competent and he makes the point without wearing out his welcome before the band takes up "Soul in the Wind", which is followed by a sizzling cover of THIN LIZZY's "Are You Ready". What a great choice!

Lande may not reach the vocal heights of a Ronnie James Dio, but he makes up for it with pure passion and the occasional soulful (by way of the British hard rock tradition) nod to Glenn Hughes and David Coverdale. "Live in Black" should also prove once and for all — at least for those not previously "in the know" — that his band is a heavy metal class act. Start with "Live in Black" and work your way backwards.