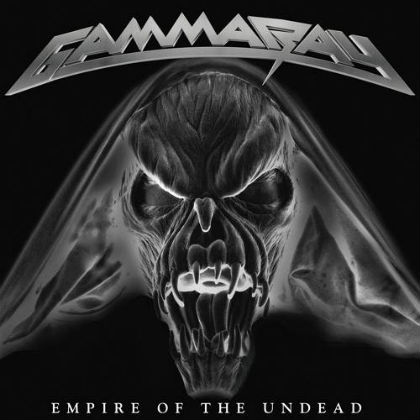 Empire of the Undead

Seldom few would utter the name GAMMA RAY in vain and if so, they'd be met with disdain twofold from the metal community. GAMMA RAY may slip here and there, but they've historically delivered with more professional consistency than the majority of their peers. Having recently suffered the loss of the band's Hammer Studios to fire while GAMMA RAY was on tour, the fact their eleventh album came about is a small miracle. That being said, "Empire of the Undead" means business and adversity turns into release. Everything GAMMA RAY fans expect of them turns up inside this well-inspired album that screams "Halle-freakin-luiah metal!"

"Avalon" will delight purists with its patient yet heavy building modes, starting with a medium marching roll, allowing Kai Hansen to orate like a troubadour until the song steps up the pace midway and keeps gaining momentum. "Avalon" soon hits a full gallop as Hansen and Henjo Richter scatter guitar solo after guitar solo, bringing the cavalcade home with a stamped down reprise of the original melody. The juxtapositions of "Avalon" are terrific and well-worthy of a band holding the stature GAMMA RAY does. This is one of the few bands that can hit their audience with a nine-minute epic out the gate and make it feel like a grand opening instead of bloated overkill.

Stand by for the gusting tornado of "Hellbent", a song as beautiful as it is fast. While the anthem-driven choruses of "Hellbent for metal!" are straight out of yesteryear and somewhat silly in more jaded times, it's sold with conviction, particularly with the blinding solos and perforating bass glides from resilient team player, Dirk Schlacter. Call it trad HELLOWEEN or trad GAMMA RAY, "Hellbent" is an instant classic for Hansen and his performers, who will not doubt enthrall their fans by whipping this one up live. Afterwards, "Pale Rider" keeps the pressure on with driving riffs, Michael Ehre's (who does a solid job in replacement of Dan Zimmerman) pounding beats and Kai Hansen leading the rowdy chorus of "Burn, motherfucker, time to feel the flame, listen to the whiplash crack your brain". Perhaps Clint Eastwood's preacher imposter lead felt the same way, at least in thought.

"Born to Fly" indeed soars with its throttling loft and hum-along choruses, to which the synths add airborne intonations and the guitar solos breeze instead of slam. Tastefully executed from all stations, "Born to Fly" has "hit" ringing all about it. Afterwards, "Master of Confusion" keeps the tuneful strides going. Hansen has written this song numerous times as far back as HELLOWEEN's "I Want Out", but he knows his audience and "Master of Confusion" will hit the right chord, even by repeating old themes.

The title track is a frying pan of popping shred and scorching thrash, like old school MEGADETH bearing a bit more synth washes. On the opposite end of the spectrum, the power ballad "Time for Deliverance" rings a hell of a lot of like QUEEN on the choruses. Nevertheless, lighters up, since "Time for Deliverance" is delved sharply, if holding back the trigger a little during the guitar solo, since the spot offers the entire band an opportunity to go full monty and they lay off instead.

Kai Hansen's vocals are largely as spirited as his guitar work. Since taking over the mike after Ralf Scheepers' departure eons ago, Hansen's proven to have a tremendous work ethic in double duty. On occasion, his throat rebounds on him here, but Hansen's passion is inarguable and not many could keep up the lithe energy as he and GAMMA RAY do on "Empire of the Undead". Studio fires be damned, the band still sounds unstoppable, as if the trouncing parting number "I Will Return" isn't proof in the pudding.