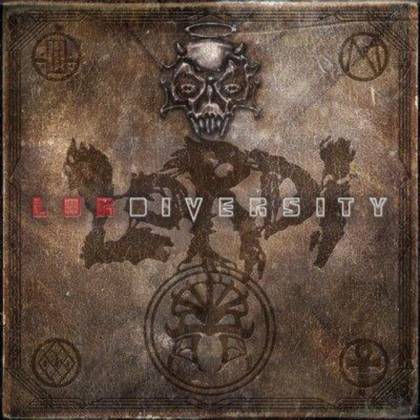 The Masterbeast From The Moon
01. SCG Minus 5: Transmission Request
02. Moonbeast
03. Celestial Serpents
04. Hurricane Of The Slain
05. Spear Of The Romans
06. Bells Of The Netherworld
07. Transmission Reply
08. Church Of Succubus
09. Soliloquy
10. Robots Alive!
11. Yoh-Haee-Von
12. Transmission On Repeat

You will probably need to set a whole day aside to listen to the new LORDI album. 78 songs deep and four hours and 44 minutes long — well, let's just say that this is one for the diehard fans. The premise is all important, of course: LORDI's last album, 2020's "Killection", purported to be a time-travelling compilation, recounting what the Finnish band would have sounded like at various points along the rock history road. Arguably the finest example yet of what happens when a prolific songwriter deals with the consequences of a global pandemic, "Lordiversity" fleshes out the compilation, delivering seven full albums, each one taken from one supposed era in this imagined LORDI's illustrious past. It's an audacious idea, and one that frontman and creative mastermind Mr. Lordi has thrown his blackened heart and monstrous soul into. Despite its daunting size, "Lordiversity" is a wildly accessible and frequently inspired triumph.

Nobody needs a detailed description of 284 minutes of music, and there are so many highlights here that it is hard to know where to start. "Skelectric Dinosaur" kicks things off with an inch-perfect homage to early KISS and ALICE COOPER; the garage rock guitar tones and strutting, New York-via-Detroit simplicity of the songwriting is absolutely bang on the money throughout, and songs like "Maximum-O-Lovin'" and "Blow My Fuse" are very nearly the equal of the ageless anthems they are saluting. "Superflytrap" is the first of several curveballs: a joyous and pulsating splurge of shiny, AOR-tinged disco rock, it occasionally sounds like THE NIGHT FLIGHT ORCHESTRA fronted by Sweetums from "The Muppet Show", and I think we can all agree that that's an excellent turn of events. In particular, opener "Macho Freak" blends bubbling '70s camp with LORDI's expected brute force, resulting in a disco-metal banger for the ages.

Album number three is another detour into territory that may alienate a substantial section of its creators' fan base. "The Masterbeast From The Moon" plunges into the bombastic and opaque world of late '70s pomp rock, with shades of everything from KANSAS and STYX through to MAGNUM and SAGA, and the songs are more complex and less boisterous as a result. A rare moment of respite, the elegant and hazy "Hurricane Of The Slain" absolutely reeks of devotion to ALICE COOPER's "From the Inside": again, an excellent turn of events.

If it's thunderous heavy metal with a strong spiritual link to the early '80s you want — and why in Satan's name wouldn't you? — then the fourth album in this absurdly opulent set is the one for you. "Abusement Park" is a treat for fans of big, glossy singalong metal anthems, as songs like the arena-targeting title track and the ridiculously catchy "Grrr!" pay rowdy tribute to SCORPIONS, DOKKEN and W.A.S.P. and countless other bands from the beginning of heavy metal's first era of commercial dominance. Mr. Lordi can write songs like these in his sleep, of course, but everything from tear-stained semi-ballad "Carousel" to the Teutonic thump of "Up To No Good" feels crafted and fully realized, with meticulous attention to detail. Album five, "Humanimals", edges further into the same decade, embracing the radio-friendly sheen of peak DEF LEPPARD, BON JOVI and SAMMY HAGAR-era VAN HALEN, delivering several genuinely great songs along the way: "Be My Maniac" and the loping groove of the distinctly LEPPARD-like "Like A Bee To The Honey" both standing out.

As metal got heavier in the '90s and beyond, so does "Lordiversity". Album six, "Abracadaver" is arguably the best of the lot. From its eccentric, spaghetti western-style intro to the face-ripping pure metal of songs like "Devilium" and "Beast Of Both Worlds", LORDI's mastery of all metallic trades is on full display. At times as heavy as prime PANTERA, and full of "Painkiller"-era PRIEST-isms, it's a non-stop riot of great riffs, gonzoid choruses and unexpected bursts of everything from symphonic black metal keyboards (on the grandiose but gritty "Evil") to swaggering, Southern-fried sludge riffs (the deeply gnarly "Acid Bleeding Eyes"). After that, the final album's swerve into ROB ZOMBIE and NINE INCH NAILS territory makes perfect historical sense and, as fans may expect, works brilliantly with Mr. Lordi's hook-stuffed but grim-hearted blueprint. "Demon Supreme" is the best song WHITE ZOMBIE never wrote; "Killusion" is stuttering, EBM-style synth rock; "Goliath" is the best MARILYN MANSON rip-off anyone will hear this year; "Shake The Baby Silent" harnesses bad taste big riffs, for a deliciously dumb, industrial rock hoedown. It is all, almost without exception, stupidly entertaining.

LORDI have never been a band for everyone, and this seven-album monstrosity is unlikely to win them many new converts, but if you do have that day to spare and really, really need cheering up, "Lordiversity" will absolutely provide. Big tunes, ridiculous concept, 284 minutes of expertly constructed cartoon horror: it's the perfect distraction for the impending arrival of a cold and miserable winter. Thank you, evil Santa!