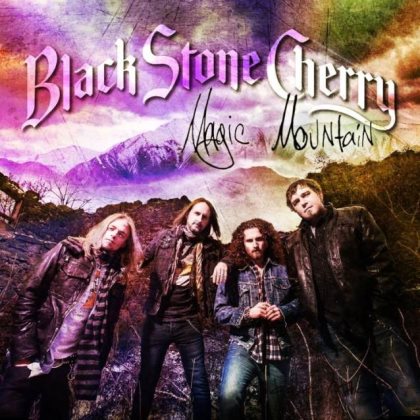 Quickly building their reps on Southern rock revival and a blistering live package, Kentucky headhunters BLACK STONE CHERRY are back with their fourth album, "Magic Mountain". Innocuous in title to the casual eye, maybe, a veteran rocker and trip seeker will be guffawing knowingly at the title's true implications. "Magic Mountain" indeed celebrates illicit things with plenty more of the band's SKYNYRD affinities. This time, however, BLACK STONE CHERRY huffs a lot more harmony into the scheme. Getting high with this album is the intent, and BSC wants to make sure their listeners feel like they're on one of those carnival spin rides (i.e. The Himalaya) with a blaring rock soundtrack thrumming inside their ears once the expectant dizziness comes raging.

"Holding On to Letting Go" crashes out with fuzz-bombed stoner riffs, then it assumes a melodic swing that beckons the FM sect. The nicest surprise to "Holding On to Letting Go" comes via a superb bridge section that's bipolar to the rest of the track. Afterwards, "Peace Pipe" slithers along with rumbly verses and apposite dreamy choruses preaching a Sixties hippie ethos: making love, denouncing war and "seeing the world through different eyes." The solo section breathes heavier smoke into BLACK STONE CHERRY's filtered aerosol on "Peace Pipe" and makes it more than an idealistic dropout jam.

"Bad Luck & Hard Love" is coolest on its wrangled-up riffs and wah-washes that manifest through the intro and outro, plus intermittently to offset the mid-paced concord of the song's pedestrian glide. "Me and Mary Jane" gets a similar treatment as BLACK STONE CHERRY throws a chum-filled, Southern rock twist on Rick James' metaphoric pot hymn. BSC turns "Me and Mary Jane" downright anthemic, and it ought to become an instant hit in Colorado, if not other party central hubs around the world.

The lumbering quasi-ballad "Runaway" is a decent if throwaway pause from the sweaty pace of the album, which is retained by the title track's rocked-out pleasure pill and the tramping riff machine, "Never Surrender". The swirling organs in the back of the former two tracks provides that aforementioned carny swirl as Chris Robertson seizes the opportunity to go nuts with his huckster-hollering on the trails of "Never Surrender"'s choruses.

The only nattering thing about "Magic Mountain" is its obviousness. Clearly its core ethic is relegated to toking and chugging, but no matter how sharp and entertaining the verses are, the commercial-driven choruses get a bit tiresome. Those listeners carrying a buzz by the time the tone-drenched, honky tonk-slung "Blow My Mind" lobs along will hardly care. They might miss the pretty acoustic lines and Chris Robertson's pensive delivery on "Sometimes", yet the subversive back-end guitar swooning and outright hallucinogenic solo section just adds to album's thrill spree.

"Fiesta del Fuego" gets downright dirty on the main plods and the swampy guitar slides on the bridges, but BSC hits a snuggly chorus that fits, yet hardly does the rest of the song's badass antics (the speed freak finale hits "Magic Mountain"'s highest peak, along with the breakaway hoedown at the end of "Hollywood in Kentucky") proper justice.

BLACK STONE CHERRY have the goods, however you interpret that statement. They can play the hell out of their stations and they avoid becoming a CLUTCH or THE SWORD knockoff as most of their ilk have. There's nothing wrong with a little accessibility to what is stoner rock at-heart, but fed in repeated dosages, it inevitably becomes a buzzkill.