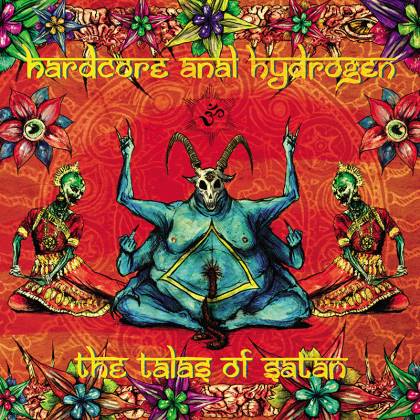 The Talas of Satan

There's so much going on in "The Talas of Satan" between the bookended tablas and hand percussion featured on "Dhamar" and "Chautal" that it will take multiple listens to dig up the numerous layers Martyn Clement and Sacha Valony (now joined by new bassist Jonathan Marole and drummer Damien Salis for their live performances) cram for discovery. Assuming you dare, of course. By the time Clement drives the whumping guitars into Sacha Valony's quixotic flutes and the backing percussion on "Dhamar", expect things to get rowdy in a hurry.

Before you can recover from that brain-chewing madness, the guys tinker with electronic bleeps straight out of Mario Land Nintendo on "Pantamere" that unexpectedly morphs into a beauteous synthetic Japanese whisper. Considering the creators of those goofy Mario games have likely downed magic mushrooms of their own over the years, HARDCORE ANAL HYDROGEN become kindred spirits accordingly. Right afterwards, the gas pedal is crushed to the floor on the cranked-up "Kalakaka", where Martyn Clement dishes flailing scales amidst the skidding crunk and electro scrapes. Once again thrusting their listeners into a ripping fast video game hell on "Rupack", the sheer exhaustion of it all would be enough to call it a day at this point.