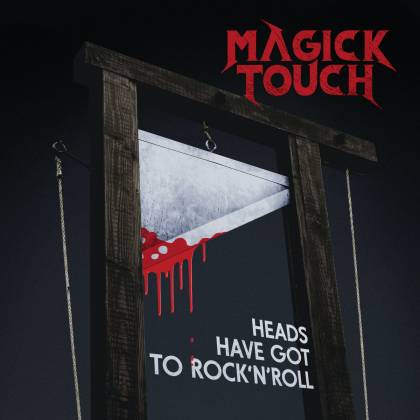 Millions of words have been written about the bands that mastered, pioneered and defined a genre. The bands that are jacks of all trades and scratch the right itches in multiple corners of a genre can often get lost in that shuffle. MAGICK TOUCH definitely falls within the throwback-metal tag. But while some bands fall firmly into NWOBHM-worship or pure retro-thrash, this Norwegian power trio infectiously explore every corner of what could have been classified as melodic heavy metal between the years of 1983 and 1987. Their third record, "Heads Have Got To Rock'n'Roll", seems to serve as an audio guide to that era similar in manner to a Cliffs Notes guide from the same time period.

The opening track is a galloping ripper that would have fit snugly on a 1983 record store shelf alongside the British imports that Lars Ulrich was scooping up by the handfuls. MAGICK TOUCH's strengths are omnipresent fairly early into "(This Isn't) Your First Rodeo". The vocal portions of the songs — with lead passages being traded off between guitarist HK Rein and bassist Christer Ottesen — are primarily built around catchy harmonized choruses, backed by drummer Bård Heavy Nordvik. Rein often takes the same approach with his guitar work by stacking multiple layers of riffs to equate the harmonized highs achieved by the band's vocals. Many bands would be content to figure out that they are effective at cloning the gallop of the early '80s British scene and ride that out for the next 35 minutes, but thankfully the trio proves to be explorers.

While the harmonized vocals and guitars still carry the majority of the songs, MAGICK TOUCH seamlessly weaves its way through heavy metal's mid-eighties history. "Watchman's Requiem" has a slightly heavier crunch, to the point where if the guitars were slightly downtuned and the song's tempo was slightly slowed-down, it would have been a catchy slab of stoner-doom. Those of you with a yearning for fist-pumping arena-metal anthems will be satiated by "To The Limit". Here, the band shows a flair for the call-and-response heights of rockers that had a brief fling in MTV's daytime rotation, while still keeping their riffs grounded in just enough ominous darkness to not fall into the realm of bands that were made fun of by dudes in MOTÖRHEAD t-shirts. "Love is a Heart Disease" does slide a little bit more into the hair-metal realm with its cowbell-driven rhythms, but the group's mastery of balancing that songcraft with a dirty aura of heaviness — most notably on Rein's shredding guitar solos — once again result in a winning track.

The remainder of the record sees MAGICK TOUCH continuing to explore multiple paths that will please plenty of old-school leaning rockers. "Ready for the Quake" sees the band capably replicating the sleazy blues-rock of Bon Scott-era AC/DC, and the adrenaline-fueled arena anthems come back in full force one more time on "Daggers Dance". The trio takes another side trek into mid-tempo doom with the heavy stomp of "Phantom Friend", and revisits that heavy trudge with the album-closing "Doomsday I'm in Love".

There are plenty of bands that are good at replicating one aspect of heavy metal from previous eras. The fact that MAGICK TOUCH proves adept at exploring different corners of that history, while seamlessly weaving their way from one end of the road to the other and keeping it catchy and infectious, gives plenty of reasons to keep clicking play for repeated listens to "Heads Have Got To Rock'n'Roll".