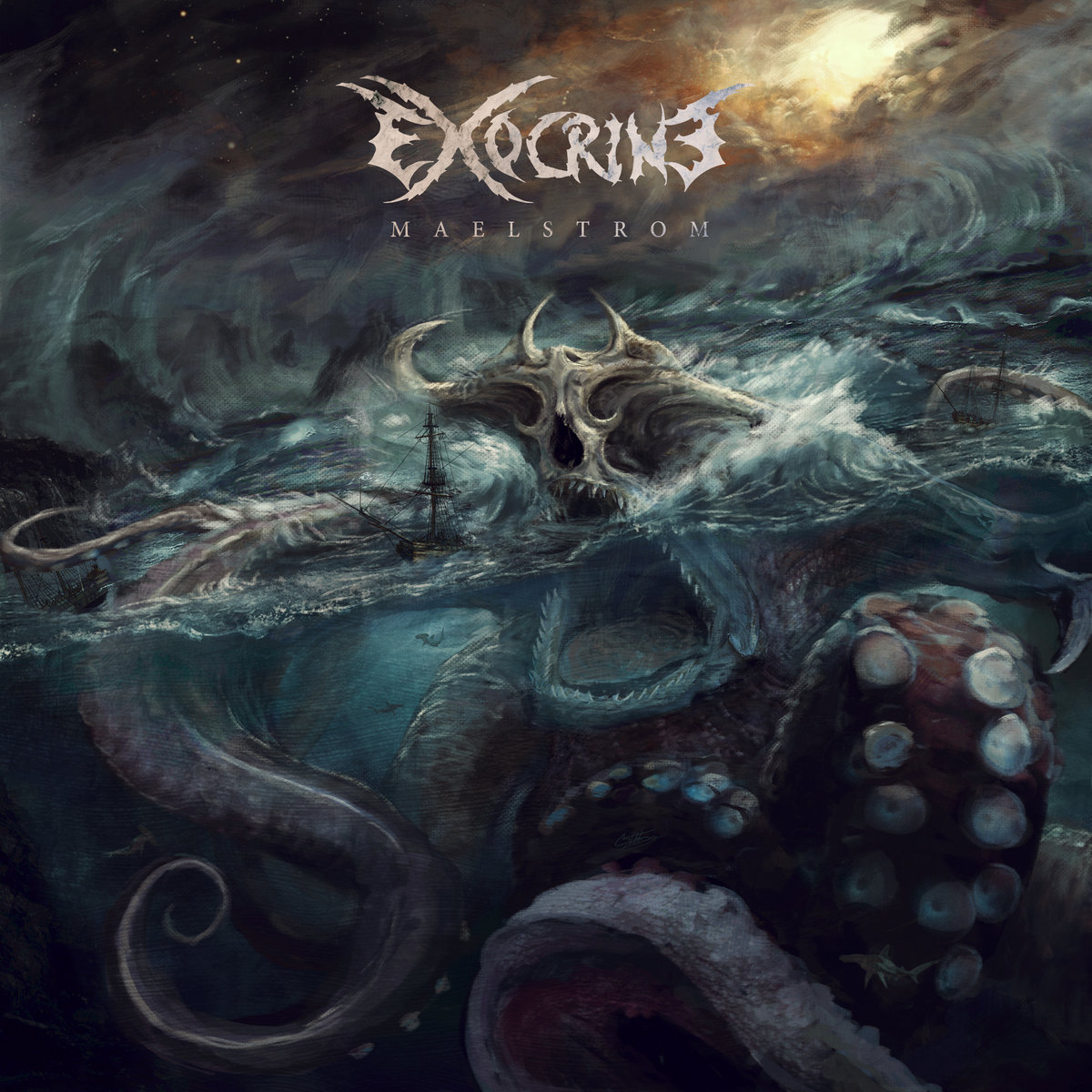 If you heard EXOCRINE's last album, "Molten Giant", then you will be well aware that the Frenchmen are definitely not just here to make up the numbers. Technical death metal often gets overlooked in the great post-millennial subgenre free-for-all, but it's bands like this and albums like "Maelstrom" that are pushing the boundaries of extremity with the most gusto right now. As with all great death metal releases, the clincher comes when your jaw hits the floor and you splutter out the simple phrase, "Holy shit!": EXOCRINE are, in the best possible way, an absolutely ridiculous bunch of musicians, collectively armed with speed, intensity and precision on a level that, while not unprecedented, is still pretty fucking impressive. And that's before you hear the trumpet at the end of "Wall of Water".

"Maelstrom" begins with its title track, and it's a startling onslaught of great ideas, all delivered by what appears to be an eight-legged machine of some kind. But where many of their brutal and technical peers might be satisfied with a dizzying succession of riffs and tempo changes, EXOCRINE have a progressive streak a mile wide, and it's the avalanche of deft touches, unexpected detours and moments of exquisite melodic power that separates everything here from the vast majority of like-minded music being made in 2020.

"The Wreck" is a particularly devastating example of this band's left-of-center ethos. From the ghostly jazz intro to some of the sickest goregrind blasts and porcine squealing you'll ever hear, via jazz-infused instrumental meanderings and more; it's a masterclass in wringing freshness and verve from a well-established formula. Meanwhile, EXOCRINE's drummer is hitting speeds that may well be illegal in more conservative parts of France, before another (muted) trumpet wails over the sound of waves crashing on the shore. This is so far from cookie-cutter modern death metal that it may bring a tear to your eye.

It's not all hyper-complex synapse-evisceration, mind you: "Maelstrom" has numerous hooks hidden within its tightly coiled structures. "Starvation Project" showcases the Frenchmen at their most succinct; still hurling a laudable number of perverse ideas into the mix while allowing an almost OPETH-like sense of melodic grandeur provide the song's central focus. At the other end of the scale, finale "Galactic Gods" feels like a fiery-eyed demonstration of EXOCRINE's collective prowess; tech-death delivery, jazz fusion spirit, cinematic flair, virtuosity pushed to the absolute max but still driven by that age-old desire to move the crowd. If fans do circle pit to this stuff in the near future, they may find themselves burrowing into the Earth's core rather swifter than anticipated.

In an already excellent year for the genre, France's premiere technicians have just boldly gone a little bit further than everyone else. Holy shit, indeed.