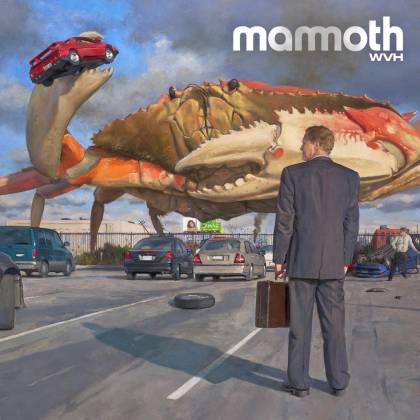 When you're the son of arguably the greatest heavy metal guitarist of all time, pursuing a career in music will always occur under unimaginable pressure. No one could criticize Wolfgang Van Halen for taking so many years to finally feel able to unleash his singular creativity, and any residual doubts will vanish quickly when people actually hear this thing. "Mammoth" is neither in thrall to its creator's illustrious heritage, nor guilty of the timidity that could easily have held him back. Instead, Wolfgang's first full-blown musical statement is a joy from start to finish and coins a wholly individual take on modern heavy/alternative rock in the process. Of course, the untimely passing of his legendary dad has lent the first MAMMOTH WVH album plenty of extra emotional oomph, but "Mammoth" thrums with sincerity and warmth anyway: these are big-hearted songs, powerfully played.

An understated songwriter and endearingly un-flashy multi-instrumentalist, Wolfgang Van Halen played every instrument and wrote every song. As a result, the whole thing truly swings; his fabulously belligerent drumming is a particularly thrilling revelation. Meanwhile, with a subtly diverse array of styles that encompasses everything from bullish, straightforward, FOO FIGHTERS-style hard rock to hazy, psychedelic Americana with lovable TOM PETTY vibes, "Mammoth" is quietly adventurous and wonderfully dynamic.

It begins with the absurdly catchy "Mr. Ed", wherein Wolfgang delivers a powerhouse vocal over some irresistibly gritty radio rock, setting a bright and thunderous tone for everything that follows. Although still melodic to its core, "Horribly Right" showcases a gnarlier edge to the MAMMOTH WVH sound, juddering, sludgy riffs battling it out with another supremely memorable chorus; "Epiphany" is a shuffling, sky-punching, arena rock explosion; "Don't Back Down" is balls-out stoner rock, with a particularly mighty vocal from the man himself, and riffs that gleefully twist the SABBATH-ian blueprint.

There are more mellow moments too, all underpinned by the sturdiest of rhythm sections. "Resolve" is a loose-limbed, bluesy sprawl; "Circles" is a sun-scorched drift across some shimmering desert plain, with a wildly dramatic final crescendo; "Think It Over" is exquisite and oddly timeless power pop with a faint AOR sheen; epic closer "Stone" is downbeat but dreamlike, switching from a tense, ghostly creep to billowing waves of overdriven pomp, stopping off for some angular doom riffing along the way. Elsewhere, those craving some nuts-out hard rock will be well served, particularly by the sharp and snotty "You'll Be The One" and the strutting blues metal of "You're To Blame".

Throughout it all, a strong impression is given of a musician with a very clear idea of what he wants to do and all the requisite skills to make that vision real. "Mammoth" exists in no one's shadow. This is a bold and eminently lovable debut, full of great songs and electrifying performances. A chip off the old block, then, but this is the start of a new legacy.