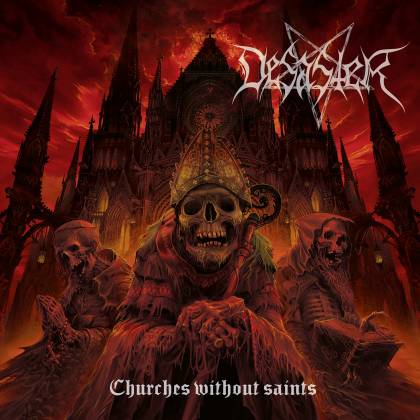 There is something magical and deliciously nasty about that blood-spattered sweet spot where death and thrash metal meet. DESASTER have been mining that viscous seam since the late '80s and have, in true German tradition, made a noble virtue of their refusal to deviate from the left-hand path. Frankly, few bands do this stuff better than DESASTER and "Churches Without Saints" is the kind of instantly satisfying avalanche of hateful, muscular extremity that almost defies analysis. If you're in this metal thing for the long haul, this will make you want to bang your head. It's that simple.

Five years on from the infernal assault of "The Oath of an Iron Ritual", DESASTER have noticeably loosened up a little. The result is that their ninth full-length album has a real swing and swagger to it: the ragged fury of the old school, whipped into shape by three decades of active service. "Learn to Love the Void" rattles in on waves of VENOM and DISCHARGE debris, with frontman Sataniac barking and gargling existential threats like a cracked mirror LEMMY on a mission to deafen and terrify the world. The core of the band's sound continues to favor a grubby thrash attack, but swathes of blackened discord and a mounting sense of drama are integral, too. For straight-ahead thrash moments, both "Failing Trinity" and "Hellputa" fit the bill, eschewing atmosphere in favor of grotesque, unstoppable force. But DESASTER have more than myopic devotion to the past to draw from: "Exile Is Imminent" weaves some arcane, doomy textures into an otherwise pummeling fight-to-the-finish; "Churches Without Saints" plunges into menacing, scabby-knuckled doom and black metal pomp; "Primordial Obscurity" begins as a vicious, dissonant whirlwind before morphing into a gleaming monument to old-school metal, with shades of MAIDEN, SABBATH and CELTIC FROST emanating from the mesmerizing melee. Best of all, preview single "Endless Awakening" showcases DESASTER's adventurous streak across seven minutes of old-school bravado, taking in everything from epic, mutant SABBATH riffs to tooth-shattering blackened blasts along the way.

The band's authenticity and purity of intent is glaringly obvious throughout, but the melancholy post-punk pulse of the closing "Aus Asche" hints at a deeper well of inspiration than the rest of this utterly ripping album may suggest. Either way, "Churches Without Saints" is a deafening reminder that the dark side of heavy metal is still the best place to be.