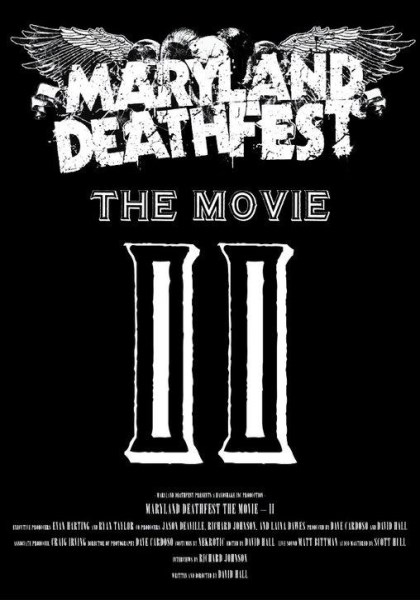 You lapped up "Maryland Deathfest: The Movie" like a parched dog. Now you've got the second installment to quench that thirst. Maryland Deathfest has turned into the premier extreme music event in North America, each year coming with more rabid anticipation than the last. You can hear it from the excited comments of attendees and musicians, as well as the manic sets from the bands, many of which haven't played in years, much less to a U.S. audience. Other acts take it as an opportunity to make damn sure their one appearance in the States is an event to be remembered for fans that have waited an eternity to witness the live onslaught. Director David Hall doesn't just document performances and interview bits; he captures the event in all its grimy glory through creative editing and gritty visuals that are about as easy on the eyes as the music is on the ears.

It is a vibe that is palpable in performances that are run the gamut from bleak to violent to mind altering. Disc 1 of the two-disc set includes song selections from no less than 36 bands playing their asses off at Maryland Deathfest VIII in 2010. Disc 2 includes compete sets by SULCAO, underrated Swedish nutters BIRDFLESH, prolific/creative/caustic Canadians FUCK THE FACTS, and convention-shattering grindcore enthusiasts TOTAL FUCKING DESTRUCTION, all of whom display the true essence what this fest is all about.

There are far too many great performances to detail each one here, but several jump out for various reasons. MELECHESH surprises with how well the mystical qualities of the studio recordings come across on stage, albeit in a manner much more feral, while an appearance by Chicago/Mexico legends THE CHASM never fails to send shivers up and down the spine; theirs is a special kind of death indeed. EYEHATEGOD burns the ears and pollutes the soul; guaranteed to make even the cleanest among you feel dope sick. A wheelchair-bound and infectiously enthusiastic Jeff Becerra still knows how to command an audience, not to mention beat them bloody with POSSESSED's unhinged brand of early death. You also get a reborn PENTAGRAM performing a truly special set, a monstrous display of Swedish death metal muscle from ENTOMBED, an insanely energetic DECEASED performance (as usual),and a lordly set from markers of the bench REPULSION. If you've been wondering what all the fuss about BLACK BREATH has been about, watch them crush, kill, and destroy here and find yourself scrambling for your credit card. You'll not be able to order "Heavy Breathing" fast enough. Grind, death, hardcore, black doom…it's all here and by the time it's all over you will in fact be spent. Oh yes, special treats — some subtle, some not so subtle — are waiting to be found as well. Guess you'll just have to buy the DVD.

What Hall does best here is make the viewer feel the intensity contained in every drop of sweat that falls to the stage, as well the energy-drain experienced by the most dedicated denizens of the event, those who would rather sell a body part than go home early. That's the kind of respect shown for the bands and dedication demonstrated by the fans in the extreme music community. On the North American side of the pond, there is no better example of it than Maryland Deathfest. If you have not yet made it to one of these gatherings of the faithful, then either of the Maryland Deathfest movies will serve as the next best thing. Go all in; anything less misses the point. Too much? Maybe, but since when is that ever enough?