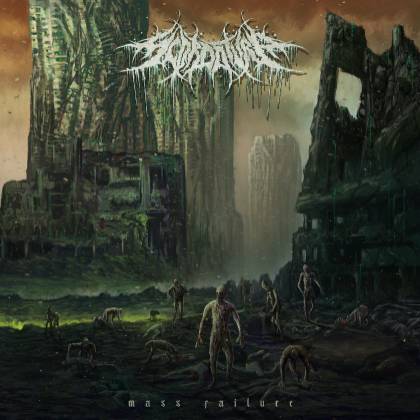 They do things properly in Scotland. Brutal death metal has never been so well endowed with mind-blowing bands as it is today, but even by this year's skull-shattering standards of excellence, "Mass Failure" rips incredibly fucking hard indeed. SCORDATURA warned us in advance, of course; both 2013's "Torment of the Weak" and 2017's "Self-Created Abyss" were utterly pulverizing and delivered with startling levels of technique and musicality. If those records lacked anything, it was meticulous songcraft: a common enough flaw in most music of this kind, which often descends into a battle to see who can string the most dissonant riffs together.

Here, from opening track "Disease of Mind"'s face-removing fury onwards, the Glaswegian quartet deliver a real master class in combining grotesque brutality and incisive heavy metal excellence in equal measure. This is still all firmly rooted in the all-out battery and atonal blast-worship of SUFFOCATION, CRYPTOPSY and DYING FETUS, but SCORDATURA have more than a few bright ideas of their own. There's an untamed perversity fueling "Skin Trophy"'s swirling riffs, even as the song delivers its stripped down, old-school payoff, a sense of ghostly disquiet remains. Similarly, "Contorted Existence" is undeniably built from deathly meat and potatoes, but its berserk, waltz-time attack is brilliantly odd; its mad-eyed grind detours, a primitive thrill.

Once again, "World Devoured" demonstrates how much smarter SCORDATURA are than the average gang of guttural brutes. The rulebook might not be on fire, but the Scots' unorthodox instincts are more than apparent as the song takes numerous rhythmic twists and turns, with an almost machine-like precision. The title track is even better, with its psychotic, stop-start gait, souped-up D-beats: everything delivered with utmost precision, but also with the kind of deranged intensity that confirms that everyone involved definitely fucking means it. Vocalist Daryl Boyce has that commanding but unfussy CORPSEGRINDER thing going on, too. Like I said, they do things properly in Scotland.

Reaching its grim conclusion with the spiraling descent into "Collapse Of Humanity"'s turbo-blasting hell, "Mass Failure" is deservedly destined to be hailed as one of the year's most brutal high points. Unlike many comparable records, however, SCORDATURA's latest show of strength has the charisma and craft to appeal far beyond myopic underground circles. Right now, this is what top-drawer, state-of-the-art death metal sounds like.