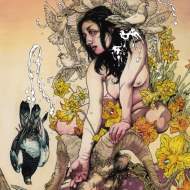 In the long run, KVELERTAK's tongue-tripping name and insistence on singing in their native Norwegian may be their undoing.

Or at least it will obstruct their commercial prospects (fair warning, Roadrunner) since even listeners who thoroughly enjoyed the sextet's impressive first album may find themselves resorting to Google to confirm the proper spelling of their moniker (yours truly, for example).

But their music surely can't be faulted, not least given the concerted move towards greater accessibility witnessed on 2013's sophomore "Meir", which, incidentally, simply means "More" in Norwegian.

In other words, if the blackened punk rock captured on the Scandinavians' debut managed to slice through the improbably large number of crust-core/d-beat bands currently inundating the metal scene so easily, it stands to reason that their second's telling evolution into deeper hard rock fundamentals will appeal to even more listeners.

But as "Meir" continues to unfold, it's almost as if each and every song has been carefully sequenced to steadily advance the classic rock storyline and ease listeners' immersion in it, with "Bruane Brenn" threatening to go all "Freebird" on our asses halfway through, "Evig Vandrar" pounding beers and punching jaws at the pub like ROSE TATTOO (and that's before the acoustic guitars come out!),"Snilepisk" retreating to violence just long enough to pacify cynics, and "Manelyst" mixing thrash with AC/DC because - well, why the hell not?

In fact, following another stab at marrying MAYHEM, the SEX PISTOLS and possibly HANOI ROCKS on "Nekrokosmos", KVELERTAK fully embrace Angus and Malcolm Young on "Undertro" (its second half is really just a long AC/DC groove),"Tordenbrak" (which, at nearly nine minutes in length, would contradict the band's short-sharp-shock ethos if the clever ideas and unexpected about-faces didn't just keep on coming),and the album's closing, namesake tune, which essentially tips the group's hand as wannabe heirs to TURBONEGRO, minus the head-to-toe denim and homoerotic sailor man schtick, of course.

So yes, the sound of Norway's younger, though not necessarily randier, hybrid-rock sextet is most definitely "on the move" throughout "Meir", and while its songs retain more than enough of those dirt-encrusted embellishments to remain unmistakably KVELERTAK's work, if that first album was basically "blackened punk", then "Meir" is, uuuuuh, "grayish hard rock".

Be sure you give it a fair shake though, because the Norwegians' talent for pulling pleasant contrasts and surprises out of their eclectic heavy metal blender remains as engaging as ever, and the longer songs underscore this.

Plus, it still beats all of that repetitive crust-core by a country mile.