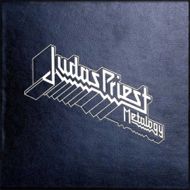 Because the two titans of British heavy metal, BLACK SABBATH and JUDAS PRIEST, have released boxed sets so close to each other (SABBATH's "Black Box" arrived last month),a compare-and-contrast is almost inevitable. And the first question that comes to mind regarding the handsomely packaged "Metalogy" is… was it necessary?

In the case of SABBATH's release, it contains their first eight classic albums, all remastered and repackaged, making up for the shitty way in which Warner Bros. treated the band's catalog for so long. No extras save for "Evil Woman", which most SABBATH fans have heard anyway, but what a revelation to hear these albums like never before! Power, clarity, and depth, plus a nice package and an excellent, comprehensive book full of rare photos and candid history.

The problem with "Metalogy" is that Sony Music did an extensive reissue of all twelve of PRIEST's Columbia discs just two years ago, remastered, repackaged, and with bonus live and studio tracks. You could get the British versions in a black and silver embossed box. Either way, hardcore PRIEST fans probably went out and snapped these up. "Metalogy", on the other hand, mostly compiles songs from the Columbia catalog, but does acknowledge the heads and tails of the band's career until now, with a handful of numbers from the pre-Sony albums, "Rocka Rolla" and "Sad Wings Of Destiny", and four representatives of the frankly dreadful "Ripper" Owens era. But the big selling point for diehard fans is supposed to be a batch of live cuts and one unreleased demo of a song that was better left unheard anyway.

I don't know about anyone else, but I couldn't give a shit about live cuts. I love seeing bands live, and there are some great concert albums out there, but live cuts tacked onto ends of CDs like this do nothing for me. Having said that, the completist may very well want to spring for the entire box, just to have these.

As a thorough introduction, for the uninitiated, to the majesty and greatness of the PRIEST, "Metalogy" certainly can't be faulted. And for someone who can't afford all the albums, or doesn't need to own them all, it's a great overview. Fans can sit around and quibble all day about whether this track or that belongs on there (I personally would like to see the obscure "Island Of Domination" from "Sad Wings" get its due),but every important album is well-represented. Even the low point of singer Rob Halford's original tenure with the band — 1988's "Ram It Down" — gets four songs aired. The sequencing is odd — the "Screaming For Vengeance" stuff is split between disc two and disc three — but you can't have everything.

Or can you? There's still PRIEST material we haven't heard, like the notorious Stock-Aitken-Waterman sessions and an official recording of the lost early tune, "Mother's Son", heard only on bootlegs of the band's 1973 Reading Festival appearance. Perhaps someday this material will surface, but will everyone want to pay for yet another box?

The best prize included in "Metalogy" (at least the first pressing) is the bonus DVD recorded on their 1982 "Screaming For Vengeance" tour. The show captures the band as they were reaching a commercial and artistic peak, headlining arenas for the first time, and their excitement and energy is palpable. Having seen this tour myself, I can safely say that the DVD is a wonderful snapshot of one of the world's greatest live metal bands at the top of their game.

"Metalogy" also features a terrific book, stuffed with lots of previously unseen photos, extensive and serviceable liner notes ( a little more digging into the band's early days would have been nice),and a handy timeline. Finally, the box itself — made of leather and bordered by its own "wristband" of metal studs — is sleek, ingenious, and perfectly suited to the legacy within. Were that legacy not already out there in the world, or made just a little more complete, then "Metalogy" would rate a 10.