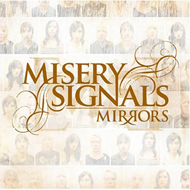 I have a vague recollection of a review I wrote for MISERY SIGNALS' debut "Of Malice and the Magnum Heart" in which I basically stated that it was not an enjoyable effort nor was it an impressive one. The memory was unpleasant enough to almost result in my avoidance of a review of the group's new album, "Mirrors". Now I think I need to go back and check out "Of Malice and the Magnum Heart" again, as "Mirrors" impressed the hell out of me. On this sophomore full-length, the progressive metalcore quintet is firing on all cylinders. "Mirrors" gets it right on so many levels here that it makes me wonder what kind mental trauma I was experiencing when listening to "Of Malice and the Magnum Heart". Or maybe it was a simple case of the album just not "doing it" for me, whatever the reasons. Too bad I can't find the damn thing to be sure.

Overall, MISERY SIGNALS' fusing of ironclad heaviness, arresting melodies, ambient interludes, and technical musicianship is downright masterful. The ability of the unit to combine all of these elements in a way that challenges without frustrating is most impressive. Too often bands hell bent on creating an ambitious musical experience end up with a cluttered mess that is little more than a collection of disjointed parts that may be challenging to play but leave no real lasting impression. In the case of "Mirrors", the whole is truly bigger than the sum of its parts.

One could argue that new vocalist Karl Schubach is limited in range, yet I find that his aggressive bark helps to maintain a brutal core without any sacrifice in compositional dynamics. As cliché as the far too prevalent spoken word parts found on numerous metalcore releases may be, those same parts are perfectly placed and completely necessary on "Mirrors".

Make no mistake; "Mirrors" is one heavy album that punishes with non-traditional rhythms and crushing riffs that still amaze with the superb interplay of guitarists Ryan Morgan and Stuart Ross. Several sections of lightly picked guitar result in an uncannily soothing juxtaposition to the high-impact pummel of the heavy sections. Rather than cause momentum breaks in the action or that oddly out-of-place feeling one gets from albums by the band's contemporaries, the ethereal moments of "Mirrors" are uplifting and seamlessly woven into the arrangements. The group attains a fluidness that is largely unmatched in the genre. Songs such as "The Failsafe" and "Face Yourself" (to name a just a couple) do not capture attention immediately with this varied mix of elements, but the wait for the central melodies to take hold amidst the sheer force of the songs is not a long one either. The standout from a melodic standpoint has got to be "One Day I'll Stay Home". It feature a tuneful vocal and main melody that is laid back and engrossing in its, for lack of a better descriptor, pop sensibility. Elsewhere, the influence of acts like ZAO and CONVERGE are certainly apparent, but not in the way of blatant mimicry; instead, it attests only to MISERY SIGNALS' inventive nod to the trailblazing efforts of its forebears.

It is not as though "Mirrors" will make metalcore haters into fans, nor is that the intent. Praise for "Mirrors" is due MISERY SIGNALS solely for creating a passionate album for pushing the limits of an increasingly limited genre.