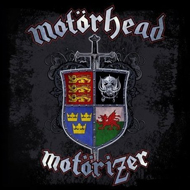 The consistency with which MOTÖRHEAD releases quality albums is largely undisputed. Though folks may debate the relative merits of each release, some of which might include a few duds, most would agree that bassist/vocalist Lemmy Kilmister, drummer Mikkey Dee, and guitarist Phil Campbell — a long-running lineup and arguably the band's best (let the debates ensue) — leave at least a handful of memorable tracks with each release. The act really nailed it on 2004's highly praised and extra aggressive "Inferno" and followed it up with another strong effort in 2006's "Kiss of Death". What sometimes gets lost in the appraisals by the casual listener is the staple of any MOTÖRHEAD album, a love of the blues and early rock n' roll boogie, attributes overflowing on new release "Motörizer", one of the trio's more well-rounded discs with a little bit of everything that has defined MOTÖRHEAD's career.

It would be a real stretch to say that "Motörizer" breaks new ground, which has never been a requirement for the band or its fans, as Lemmy pioneered his punk/rock/metal/blues style and stuck to it with nary a band coming close to replicating it. As such, tracks like "Runaround Man" and "Teach you how to Sing the Blues" are classic examples of 'HEAD boogie with Lemmy's patented patterns and lyrics, catchy refrains, and loud 'n proud delivery. "Buried Alive" follows suit, this time with the kind of polished melodic chorus that has surfaced occasionally on albums since 2000's "We are Motörhead". The same can be said about the chorus on one of the album's standout tracks, "English Rose", a total R&B toe-tapper with segments that recalls the Chuck Berry rock of "Going to Brazil" and Lemmy's clever lyrical innuendos (e.g. "you're the one that rings my chimes"). "Rock Out" is a two-minute, punky fast blast complete with a monster bass intro that you've heard many times before ("Ace of Spades", "We Are Motörhead", "Iron Fist", etc). It is a track that would have fit snugly in one form or another on most any album from the last 20 years. The MOTÖRHEAD formula continues with the requisite anthems of battlefield valor on "When the Eagle Screams", one of those mid-tempo ironclad beasts that the band tends to favor, as well as the slower-paced, standard hard rock tune "Heroes". "Time is Right" is a typical MOTÖRHEAD headbanger with one of Campbell's tough, metallic riffs. Album closer "The Thousand Names of God" turns out to be the album highlight with a driving rhythm, Campbell slide guitar licks, and an eminently catchy chorus that sucks you in from the get-go; just a great song.

It is on "Back on the Chain" and "One Short Life" where the blues are front and center. The former is the type of blues rocker that is reminiscent of early MOTÖRHEAD tracks like "(I Won't) Pay Your Price" or "I'll be Your Sister", generally speaking (more feel than song structure),with a 2008 treatment. "One Short Life" is a slow-burn blues cut with Lemmy (presumably) recalling the hard scrabbling teachings of his mother.

For the MOTÖRHEAD connoisseur, "Motörizer" is a fine release, better than "Kiss of Death", but not as face-melting as "Inferno". Then again, it's a different album than "Inferno", so the comparison is not entirely valid. Rather, what you get is a MOTÖRHEAD album that borrows liberally from Lemmy's toolbox and leaves one with a feeling of satisfaction. As is often the case, you'll need to wait until you've given it a few spins before you render a final decision on its worthiness.