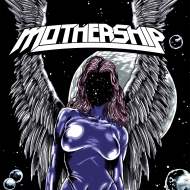 With a name like MOTHERSHIP, you'd expect this group of heshers to hail from NASA's longstanding home base in Houston, not Dallas, Texas, but we'll call it close enough for coconuts - especially since the music found on this eponymous LP has its roots in dusty deserts to the west and dustier record collections from the 1970s.

This is because, after delivering a classic "here comes the pain/I told you it might hurt" double header with instrumental opener, "Hallucination", (which churns morosely in glorious doomy sloth before bursting into high-energy stoner metal),"Mothership"'s next number, "Cosmic Rain", wastes no time with lengthy set-ups before barreling ahead into eminently recognizable stoner rock fury, laced with latent psychedelics and space rock elements.

We're talking music steeped in the familiar works of all the usual suspects here: KYUSS, NEBULA, ORANGE GOBLIN, you name it, but that don't mean MOTHERSHIP can't impress and entertain, despite working within those timeworn parameters.

Moving right along, then: "City Nights" comes back down to earth somewhat, riding a less psychotropic brand of classic rock riffing that would sound entirely at home on the Small Stone Records roster, while dredging up some finely shaped grooves and hooks that satisfy the senses and produce perhaps the best wrought song here.

Next, serious Ed Mundell-inspired shredding ushers in the ominously named "Angel of Death", which is neither a SLAYER or THIN LIZZY cover, but a clever variation on BUDGIE's "Breadfan" lick that contradicts the rest of the song's rather laid back cruise, even if some hokey lyrics eventually let it down.

And so it goes: "Win or Lose" veers just a bit into bluesier terrain, wah-wah pedal and all; "Elenin" adds cryptic astronaut transmissions (or something of the sort) into its mix; "Eagle Soars" and "Lunar Master" are both simple but effective Harleys charging down the highway, though the latter tacks on a lengthy head-nodding coda that could double as a soundtrack to a moon landing, one assumes as belated justification for its title.

Ultimately, MOTHERSHIP's great sin is aesthetic predictability, since not a single viable ingredient or offshoot of the stoner rock style escapes their attention here, and they're one of countless bands whose picture could reasonably be used under Wikipedia's "Stoner Rock" description.

Having said that, and as was mentioned earlier, MOTHERSHIP also fare pretty well when it comes to crafting decent songs inside these boundaries, and that should be enough to get their career rolling.