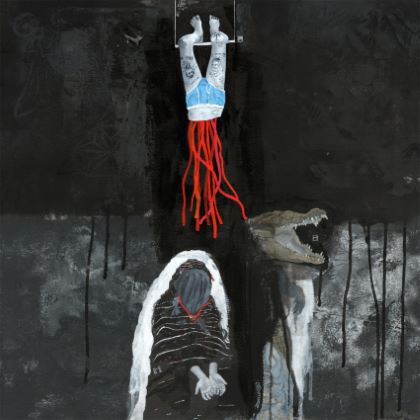 This British metal super group is going to receive a lot of attention and not necessarily for their merits. As the confirmed bassist for SLIPKNOT, KROKODIL guitarist Allesandro "Alex" Venturella (also previously in CRY FOR SILENCE) has brought this band to the global radar in a hurry. Not to be confused with the long-ago Krautrock act of the same moniker and named after the cell degenerative street drug that can devour users' flesh from within, this KROKODIL looks to inherit the limelight for their often brilliant wares on their new album "Nachash".

Also comprised of SIKTH's bassist and drummer (James Leach and Dan Foord, respectively),HEXES guitarist Daniel P. Carter, GALLOWS guitarist Laurent "Lags" Barnard and CANAYA vocalist Simon Wright, KROKODIL is officially on the map and regardless of any direct or indirect press coming their way, they're a force of their own design. Their latest album "Nachash" grabs some of the most intense tones borne of American sludge and post metal, but slung upon their own palettes fortified by a triple guitar attack. Automatic comparisons to MASTODON will be made all over "Nachash", but do not write it off. Instead, take it all in as an immense, well-conceived tribute to sludge.

"Shatter" rumbles forth with James Leach's stamping bass and the instant feel is a blend of NEUROSIS and early MASTODON. While not exactly in Brann Dailor's league, drummer Dan Foord nevertheless captures the essence of the former's mid-tempo marches and explosive snare snaps as "Shatter" thunders along. What KROKODIL does rather well behind Simon Wright's woofing is to pull some killer guitar melodies out of the song's overt slog. If not for the siren-esque layers of the guitars, the breakdown serving as the outro would've been unwarranted. However, it's so well-designed and fully stocked it closes a damned good opener while leaving the door ajar for the crashing chaos of "Skin of the Earth". Alternating between fast and slow grinding tempos, "Skin of the Earth" smartly utilizes the hasty sections for the choruses and the emergence of acoustic plugs and clean vocal rolls amidst the bridge serve as stylish transitions.

"Dead Man's Path" likewise roars with a fast intro then skitters back to a slower hardcore stomp, which spikes on the edges of the verses. A vivid progression into a burst of effervescence breaks up the brute ugliness of "Dead Man's Path" for a moment before trudging to close. "A Life Lived in Copper, But Painted as Gold" is a jiving take on MASTODON with a slicked-up groove giving the track a shake 'n shimmy instead of a clout, no matter how loud Simon Wright yells over the whole thing. Dan Foord and James Leach show their long-term efficiency as a rhythm section, particularly when the track takes a turn into a choppy breakdown that would've been a mess without them.

Alex Venturella, Daniel Carter and Laurent Barnard turn "Reptilia Familiar" into an unforeseen rock fest, churning some of the album's best riffs. A few transitions break up the core drive of "Reptilia Familiar", but those moments cleverly increase the intensity of the song, making it even more fun. The deafening "Porcelain Bones" comes off like an across-the-pond interpretation of different points in MASTODON's career, delivering a boisterous mash-up of "Remission" and "Blood Mountain". For good measure, KROKODIL concludes "Porcelain Bones" with a blasting grind finale.

James Leach leads off "The Collapse" with a reverb-pocked intro as the song slithers along and stakes a claim somewhere between MASTODON and KYUSS. The distortion jacks after a minute-and-a-half into a booming chorus and KROKODIL repeats the course as Simon Wright swaps between clean and hard modes. The fadeout static left in "The Collapse"'s wake is picked up by the torrid char of "Sleep Well, Medusa", where Wright only gets louder and the band strikes all the rambunctious chords they can to match him. Leach's froggy bass lines guide the song to a fever pitch that vanishes in mid-stride as soon as the guitars hit their zenith.

The album's moment of grace comes with the placating instrumental "Ragnarock" where synths and electric guitars wash over a gentle acoustic line and further reveals KROKODIL's expressive dynamics. "Sun Riders" works its way through slow grinding passages to elevated guitar squeals once more inspired by KYUSS. Dan Foord's traipsing marches usher the song to grandiose, if noisome choruses. This is a powerful methodology inherent to NEUROSIS and KROKODIL uses just enough of it to capitalize for their own purposes. "Sobek" again incorporates the speed-slowdown methodology, but its placement on the album is wise as the chords get heavier, the tempos meatier and the thickened, gorgeous outro sets up a massive finale on "Phyllotaxis".

While the bigger story surrounding KROKODIL omits five of the sextet's ranks, hopefully those seeking this act out to look up the origins of SLIPKNOT's latest addition will find "Nachash" to be a treasure. Whether or not Alex Venturella makes SLIPKNOT a permanent home or not remains to be seen, but KROKODIL has nothing to do sound-wise with the former. "Nachash" is very much inspired by American metal, yes, but KROKODIL consults sludgy Yank pastures only as a foundation to erect their own formidable textures. Highly recommended.