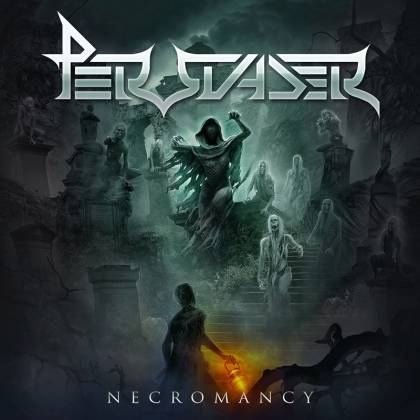 There was time, not so long ago, when power metal seemed to be dominated by bands that sounded, to put it mildly, a bit too fucking cheerful. Not that there's anything wrong with an occasional dose of positivity, but these are dark times. As humanity at least appears to be pirouetting blindly towards oblivion, super-melodic heavy metal continues to be one of the most uplifting sounds around, but preferably leavened with some acknowledgement that this world is pretty screwed up and, you know, only death is real.

Make no mistake, fans of soaring melodies, ultra-melodic shredding and multi-layered symphonic bombast will find more than enough to enjoy in the new PERSUADER album. But this is also a brutal, obsidian piece of work, with a progressive streak a mile wide and at least one toe dipped in the extremity pond. This Swedish crew have been steadily building a reputation as one of the underground's most formidable bands, and "Necromancy" confirms exactly why Frontiers Music snapped them up: nonchalantly bringing several strands of modern heaviness together, while delivering massive hooks and epic atmospheres by the score, PERSUADER are the consummate modern heavy metal band. They also have a singer, Jens Carlsson, with irresistible, in-your-face charisma and a phenomenal voice, while the recruitment of guitarist Fredrik Mannberg (formerly of the perennial underrated NOCTURNAL RITES) has clearly fueled the fire in their bellies. Previous albums have hardly been short of heavy moments, but "Necromancy" is startling in its all-out intensity and stoic adherence to the dark side.

Opener "The Curse Unbound" is glorious. It's a balls-out, speed metal symphony, with Carlsson doing his best Hansi Kürsch harmonies and a subtly theatrical, instrumental interlude that builds to an absurdly rousing crescendo and final chorus. "Scars" is an object lesson in combining brutality with catchiness; a gleefully overwrought central refrain popping up between surges of machine-gun riffing. A menacing fog descends for "Raise The Dead": six minutes of carnivorous power-thrash with guttural growls and a KING DIAMOND-like sense of the macabre. Similarly, "Reign In Darkness" goes off like prime SLAYER but never strays from a path of melodic opulence, Carlsson's sumptuous harmonies erupting from the bellicose barrage; an exquisite blend of savagery and finesse, with serrated-edge riffs to burn.

The big guns are enthusiastically brought out for sprawling closer, "The Infernal Fires". An eight-minute odyssey that boasts at least two bona fide death metal riffs and enough twists and turns to make a figure skater giddy. It has so little to do with the world of perky posi-vibes and polished, major-chord worship that it doesn't feel entirely fair to saddle PERSUADER with the power metal tag in the first place. In truth, they're a world class heavy metal band with black hearts, balls of steel and a truly exceptional new album.