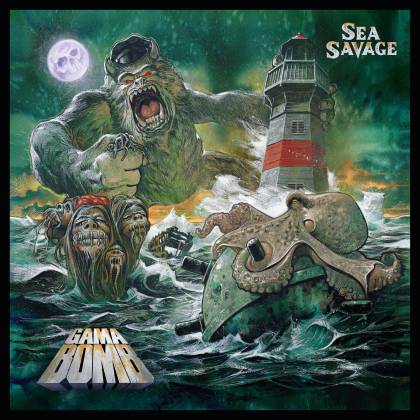 Fancy some more shit-hot thrash metal? Excellent. GAMA BOMB were always one of the most consistent and ferocious new wave thrash metal bands to emerge during the noughties, and the Irishmen's psychotic levels of exuberance and dorky humor ensured that they stayed true to one of the genre's great traditions: fun. And even in a year that has seen a noticeable surge of top-notch thrash releases, "Sea Savage" immediately stands out, if only because it's stupidly, remorselessly entertaining.

It's like your grandmother always told you, you don't know you need a song about judo until it finally arrives. "Judo Killer" says it all in three-and-a-half breathless minutes. The thrash wave that spawned them may have slowed to a trickle a long time ago, but GAMA BOMB are still plugged directly into the Paul Baloff mainframe. Much like their US counterparts in MUNICIPAL WASTE, GAMA BOMB play super hard and fast, almost always with melody at the forefront but never less than crushing. Throw in the deluge of geeky cultural nods, swivel-eyed in-jokes and often laugh-out-loud wordplay, and it's like the last 30 years didn't happen and it's Beer Pong season all over again, albeit with a vicious, punchy production that simply wasn't possible for TANKARD in 1987.

You can take your pick from an array of preposterous but always utterly slaying highlights. The title track is a stone-cold gem, even ignoring its predictably ludicrous video, and sounds like JUDAS PRIEST gone feral. Okay, so it's no "Rime of the Ancient Mariner", but when frontman Philly Byrne hits a high note, you'll be scanning the skies for incoming bird shit nonetheless, while the staccato precision of the rhythm guitars is in iron-wristed Jon Schaffer territory: no mean feat and reason enough to check this album out. The other preview single, "Sheer Khan", is a deceptively sophisticated metal song, with a ridiculous number of great riffs, nimble tempo changes, several giant hooks and lyrics that tell of a fearsome, tiger-like beast with "deadly fangs of steel." Yes, it's a song that wears a big, shit-eating grin, but this is high-octane silliness that leaves scars. Even the short sharp, fastcore ambush of "She's Not My Mother, Todd" exerts more than enough ribcage-rattling weight to be regarded in the same breath as any of the other acclaimed thrash records from the last 12 months. From the breakneck pummel of "Lords of the Hellfire Club" to the superbly titled and deeply eccentric "Ready, Steady, Goat!", "Sea Savage" is a timely reminder that if you need thrash, GAMA BOMB have got plenty of the good stuff. You never know, they might even cheer us all up a bit. Mosh!