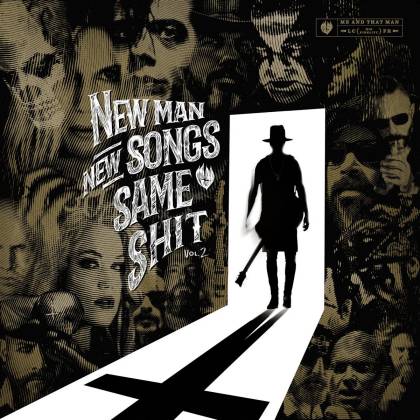 ME AND THAT MAN

A side project with legs, ME AND THAT MAN has plainly been a godsend (devilsend?) for Nergal: a self-evident workaholic who only ever sits down long enough to plot another artistic assault on the status quo. The BEHEMOTH mastermind's restless spirit must have been in danger of going stir crazy during the last two years, but there was always the piecing together of his third foray into dark folk, twisted Americana and semi-acoustic occultism to keep him occupied. Another generous dose of stripped down Nergal menace, with a frankly mind-bending roll call of underground luminaries and metal icons, "New Man, New Songs, Same Shit, Vol.2" delivers on its titular promise. It also improves considerably upon its enjoyably flawed predecessor, "New Man, New Songs, Same Shit, Vol.1"; which had plenty of great moments, but noticeably less hellish grit than 2017's "Songs of Love And Death" debut.

Darkness descends immediately this time around. "Black Hearse Cadillac" is a pitch-black, campfire mantra led by Hank Von Hell and featuring warped blues guitar from CADAVER's Anders Odden; it's grimly atmospheric and quietly magical. "Under The Spell" is a hell-for-leather "Rawhide"-from-Hell, with Mary Goore (a.k.a. GHOST's Tobias Forge) delivering an insouciant, mellifluous vocal that is all the more sinister for its restraint. Even more startling is "All Hope Has Gone", wherein three heavy metal legends (Blaze Bayley, EXODUS's Gary Holt and actualMantas) conspire to (a) make Nergal very happy, and (b) wring an ocean of glowering blues melodrama from the simplest of musical ideas. It's a barnstorming performance from all involved, but Bayley's vocal is a genuine masterclass. Likewise, ULVER's Kristoffer Rygg sounds utterly at home amid the scorched-plains strumming and acid-folk undertones of "Witches Don't Fall in Love": a macabre cautionary tale with sharp teeth.

If there is a downside to "New Man, New Songs, Same Shit, Vol.2", it's the questionable presence of self-proclaimed "proud boy" Michale Graves. The song he sings, "Blues & Cocaine", is genuinely great and brilliantly wonky, but the specter of his stupid opinions does loom in the background, presumably whispering something idiotic about vaccines or the democratic process.

Ultimately, this is an album full of little revelations, as familiar figures find themselves in a new and inspiring context. Some of the ideas coming to fruition here are truly inspired: who hasn't always wanted to hear Abbath singing some fucked up country music, as he does here on the rowdy "Losing My Blues", alongside FRANK THE BAPTIST's Frank Vollmannand bona fide heavy metal legend Chris Holmes. If you think you can hear Nergal grinning in the background, you are probably correct. Elsewhere, David Vincent and Nergal duet on the wistful and weird "Year of the Snake", with both sounding in their dust-battered element. On a similar tip, Randy Blythe sings the buffalo shit out of "Silver Halide Echoes", a gnarly, swamp blues stomp with a bad attitude. Most impressive of all, ARCH ENEMY's Alissa White-Gluz transforms into a delta blues voodoo diva on the somnambulant dub-country of "Goodbye", almost overshadowing the fact that Devin Townsend is also playing on the track. "Angel of Light", featuring Myrkur, keeps the otherworldly flag flying; a swaggering, night-sky waltz, awash with reverb and almost PINK FLOYD-like in its grandeur.

Another exuberant feast of devilry with an all-star cast, "New Songs, Same Man, Same Shit, Vol.2" is both more of the same and the best one yet. It also sounds like it was an enormous amount of fun to make. Even the devil needs to kick back and bash an acoustic every now and then, after all.