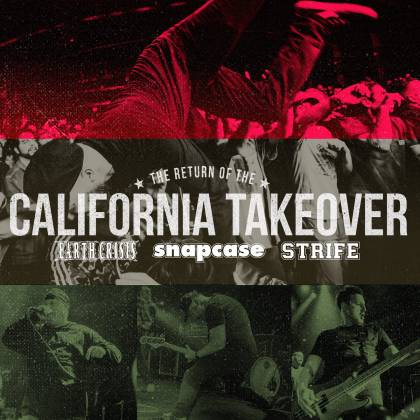 The Return Of The California Takeover

In 1996, Victory Records released what's considered one of the most important live records in hardcore's history: "The California Takeover… Live". The compilation captured the performances of nineties, genre-defining hardcore bands EARTH CRISIS, SNAPCASE and STRIFE. These hardcore stalwarts would eventually have varying periods of hiatus, but they would go on to rekindle the flame and march forth as they continue to do so today, though the gentlemen of SNAPCASE essentially perform one-offs amidst their more traditional nine-to-five careers. Fast forward to February 2020, this revered trio of hardcore powerhouses came together once again to revive that release's magic, and here present material from sets that celebrate said bands lauded material from the 1990s in a release titled "The Return Of The California Takeover", an album that includes material culled from two Los Angeles shows that pay homage to that aforementioned classic release.

In terms of raw material, STRIFE and SNAPCASE offer songs that are replete with the nineties-touched hardcore they helped define. Songs like "Zombie Prescription" and "Drain Me" are prototypically SNAPCASE in every sense, and the same can be said of STRIFE's "Stand As One" and "Force of Change". On the flip side, tracks like "Constrict" and "Born From Pain" are equally reflective of EARTH CRISIS's essence, the band that clearly sticks out from the rest of the trio. EARTH CRISIS will forever be regarded as one of the most seminal metalcore bands, not a band that's kindred spirits with AS I LAY DYING or MISS MAY I, but one that's truly born from the spirit of S.O.D., M.O.D., AGNOSTIC FRONT, CRO-MAGS and ALL OUT WAR.

"The Return Of The California Takeover" is a release worth revisiting rather than a rehash because it clearly highlights the manner in which each of the bands have developed. For better or for worse, SNAPCASE sound like a band that's scratching for long lost glory, albeit one that's appreciated. EARTH CRISIS's material, meanwhile, strikes at the chord of something that's more current, seemingly youthful and vibrant, a state that's evident because the band has been much more devoted to its ongoing pursuit. Bands age and change over time. Different priorities take over once band members lean into their thirties and forties. However one wishes to cut it, though, the trio of bands featured on this release shine brightly because of the undeniable passion that's unleashed on each and every song. Hardcore, just like metal, will never die.