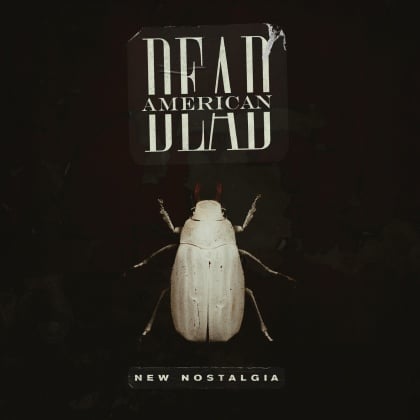 DEAD AMERICAN's debut full-length record, "New Nostalgia", does not sound like a debut, and in many ways it really isn't one. With the likes of Cove Reber (vocalist, ex-SAOSIN) and producer Fred Archambault (Avenged Sevenfold, Death By Stereo, Atreyu) at the helm, this polished, cohesive record carries a generation's worth of experience.

As its name indicates, the album is a modern take on the post-hardcore sound of the early 2000s. The album artwork itself is a near replica of SAOSIN's 2006 self-titled release. These self-described "students of the Warped Tour era" — Reber, Chad Rexton (guitar),Steve Pollock (guitar),Josh Latham (bass, vocals) and Kyle Rosa (drums) — embrace their origins wholeheartedly and use these 13 songs to build upon the past while smoothing out some of its rougher edges.

The first track, "Not Buying In", recalls UNDEROATH's massive metalcore hit "In Regards to Myself", screaming "This is not a test!" in its first few seconds. On the whole, DEAD AMERICAN's sound draws many parallels to UNDEROATH and SLEEPWAVE (Spencer Chamberlain's project during the band's hiatus) with their turbulent guitar riffs, powerful melodic choruses, scream-laden verses and guiding rock sensibility.

What sets this SoCal five-piece apart is the way they wrap their driving frustrations and grievances in a sense of acceptance. For every gruff vocal and angry lyric, there is an uplifting melody to match. The angst of youth meets the wisdom of age in songs like "The Opposite", "Can't Go Back" and "Just Let Go", creating a very layered emotional and sonic experience.

The most poignant song is undoubtedly "Reina's Song (Lost My Mind)" , which details the trauma of losing a loved one to drug addiction. Soft, narrative verses contrast with choruses that burst with heartache, mimicking the waves of calm and despair that come with the grieving process. This and the ceaseless questioning ("I wish I knew where we go/ And does the story end after this?/ What happens when the lights go out?/ Do we meet again?") feel incredibly authentic, and will no doubt elicit a gut-wrenching reaction from any listener who has ever begged for answers in the wake of death.

All in all, "New Nostalgia" is a record that swells with pride and has no obvious flaws. However, with the raw quality of 2006 largely absent from this more refined 2022 release, it could have benefitted from a few more unexpected elements. That said, it is a boon to those of us who have been waiting for a new installment of quality post-hardcore.