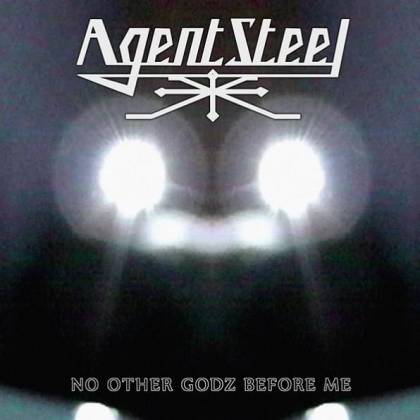 No Other Godz Before Me

If you know and love your old-school thrash, you will know that AGENT STEEL's first two albums are stone cold classics of none-more-bonkers, skull-rattling speed worship. Whether you view later albums like "Order of the Illuminati" and "Alienigma" in the same light probably depends on whether you acknowledge those later, Bruce Hall-fronted lineups as legitimate versions of AGENT STEELor despicable usurpers of original vocalist John Cyriis's rightful throne.

None of that matters at this point, thankfully. Via one turn of events or another, "No Other Godz Before Me" is the real, Cyriis-propelled deal. The album sees AGENT STEEL make an enthusiastic resurrecting of the bug-eyed and bellicose sound that made them such an ear-grabbing hit in the '80s, while shrugging off most of the sparks of modernity that colored recent albums bearing the band's name. And if that sounds like a needless backwards step, you're probably a lot younger than me. With Cyriis in fine voice, hitting the same preposterous high notes that he always did, and with deeply unhinged science fiction informing the album's concept and lyrics, it's hard to imagine what more AGENT STEEL could be doing to put a smile on loyal fans' faces.

Put simply, if you've ever banged your head to "Guilty as Charged", you are going to love "No Other Godz Before Me". The production strikes a decent balance between low-key polish and raw squall, but frankly, a song like "Crypts Of Galactic Damnation" could sound like absolute shit and still make one's heavy metal heart sing. It's utterly demented, of course, and the concept behind this album is almost certainly too convoluted and mad to warrant too much investigation. But just listen to John Cyriis shrieking his head off about some unfathomable intergalactic quandary: this is what heavy metal is all about, surely?

The best songs here are just about the equal of any of AGENT STEEL's certified classics. The title track is an absolute riot, with Cyriis drunk on helium, alarming dogs everywhere with those high notes, as a torrent of grim, chainsaw riffs scorch forth at full pelt. "The Devil's Greatest Trick" cranks up the schlock macabre, painting spooky pictures aboard a gleaming, trad metal bulldozer. "Veterans Of Disaster" incorporates a dash of QUEENSRYCHE-style pomp into the mix; "Outer Space Connection" absolutely reeks of 1987, and brings this stridently eccentric voyage through space and metal thrashing time to an utterly berserk close. Some of the noises Cyriis is making are, to put it mildly, a bit alarming. At one point he makes King Diamond sound like Isaac Hayes, and I'm not sure that I like it. But in every other respect, "No Other Godz Before Me" is easy to love. Nobody makes metal records as insane as this anymore. Welcome back, John.