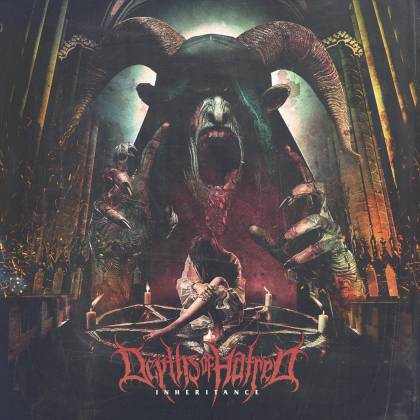 01. Enslaved Through Lineage
02. Sadistic Trials
03. Pulsating Rhythm
04. Fastidious Imitation
05. Drop Of Red
06. Illusive Obsession
07. The Gift Of Consciousness
08. Shivers
09. Inheritance
10. The End Of Ourselves
11. Emerging As One

Even in this glorious, enlightened future, it takes a deathcore band with large cojones to start dabbling with clean vocals. If there's one thing that instantly alienates a sizeable chunk of the diehard metal audience, it's the sound of some floppy-fringed, whey-faced eunuch bleating over what would otherwise have been perfectly acceptable metal riffs. For every KILLSWITCH ENGAGE, there have been at least 50 bands that really sucked. You can't argue with mathematics, folks. But unlike metalcore, deathcore was never really set up to accommodate clean vocals, and yet DEPTHS OF HATRED have somehow pulled off a crafty transition into more melodic waters, without compromising a single shred of their balls-out intensity. "Inheritance" is an audacious record, albeit one that will still, inevitably, divide opinion for the reasons cited above. Fortunately, unlike many other supposedly brutal bands that have hired a choirboy and forced him to jump the vocal shark, DEPTHS OF HATRED have a frontman whose clean vocals are powerful, gritty and emotive: you might even call William Arsenau a proper heavy metal singer. Either way, the one thing that could have brought "Inheritance" crashing down has turned out to be a triumph. Not that anyone should take this as a green light to start petitioning DESPISED ICON to use three-part vocal harmonies, but it does make the reluctance of old bastards like me to embrace change seem a bit silly.

There is nothing silly about this Canadian crew's precise and violent attack. With plenty of melodies skimmed across the machine-gun, kick-drum barrage, DEPTHS OF HATRED already exhibit a (sorry) depth and ingenuity that sets them apart from the generic crowd. Opener "Enslaved Through Lineage" is authentically gothic and menacing, and Arsenau's first act of non-growling passes by without incident, adding a frisson of wistful grandeur along the way. In contrast, "Sadistic Trials" slams the band's extremist credentials firmly down, with an avalanche of blastbeats that set up another soaring vocal hook at the song's windswept denouement. Elsewhere, "Illusive Obsession" goes furthest in proclaiming DEPTHS OF HATRED's progressive intent, with a dense, ominous atmosphere and staccato beatdown riffs used to generate disquiet, rather than destruction. Likewise, "The End Of Ourselves" is epic by design, with a rousing but melancholy refrain that rises up like smoke from a bedrock of flat-out aggression.

At this point, it might not even be fair to regard DEPTHS OF HATRED as a deathcore band at all. There is more melodic death metal and blackened pomp than furrowed-brow mosh-metal evident in the likes of "Drop Of Red" and "Shivers", and Arsenau's vocals have brought new shades of black to bear on his band's strongest record yet. Again, the clean singing might make a few people retch, but some people just like to be dramatic, don't they? In the real world, this is definitely killer.