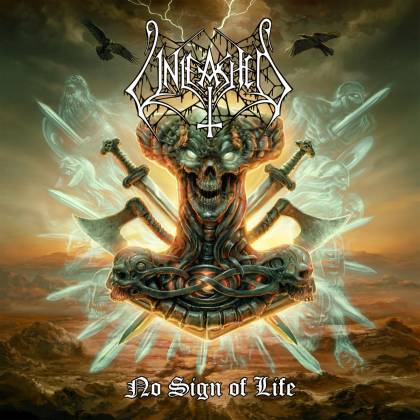 When you start something, you have every right to finish it. UNLEASHED were battering people with tales of Viking tumult and vengeful Norse Gods long before most, and even as the Swedes approach their 33rd anniversary (one for the Jesus fans, maybe?),they show no signs of losing faith nor fire. The fifth chapter in frontman Johnny Hedlund's "Odalheim" saga, the band's 14th full-length, wastes no time in the pursuit of new ideas. What it does, and brilliantly, is consolidate everything that has been so thrilling about UNLEASHED's relatively recent return to top form. As with their last two albums, "Dawn of The Nine" (2015) and "The Hunt for White Christ" (2018),"No Sign of Life" seems to draw from every aspect of three decades of recorded work, whipping the ingredients together into a streamlined and all-encompassing whole. Consequently, whether you are a diehard fan with albums like "Where No Life Dwells" and "Shadows in the Deep" etched into your synapses, or a recent convert lured in by records like "Odalheim" (2012) or "…White Christ", UNLEASHED's latest tribute to the barbaric rush of battle feels as cohesive and singular as anything they have previously released.

The best songs are prime examples of the Swedes' heavy metal instincts. "The King Lost His Crown" is a thuggish, rampant opener proclaiming the start of another bloody conflagration; "The Shepherd Has Left the Flock" is darker and more dramatic, but still delivered with heads-down, MOTÖRHEAD-saluting ferocity. In contrast, "The Highest Ideal" is a tense, deathly sprint and a triumph for simplicity and spite, with Hedlund's rabid bark a clear and present danger in the sonic foreground. Never afraid to be certifiably metal as fuck, UNLEASHED could probably churn out endless songs like the self-explanatorily stirring and bullshit-free "Midgard Warriors for Life", but thanks to a combination of Hedlund's unwavering conviction and sheer old-school exuberance, it side-steps cliché and wields rare power. "Tyr Wields the Sword" is equally exhilarating, as balls-to-the-wall deathly velocity meets classic metal opulence, and everyone comes out covered in bits of shattered skull.

The final pieces of the "Odalheim" narrative thrust are among the album's finest moments. "It Is Finished" is a macabre declaration of impending doom set to a suffocating spiral of discordant riffs and ghostly hooks; while "Here at the End of the World" lurches from visceral fury to imperious, theatrical sweep and back again; a snarling Hedlund spitting threats before a final disintegration into abstract cacophony.

So reliable that they are easily taken for granted, UNLEASHED make all of this look and sound easy, but "No Sign Of Life" is audibly hewn from blood, sweat, tears and the powdered bones of countless unworthy enemies. Barbaric business as usual, then.