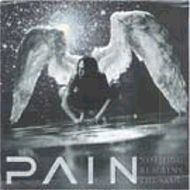 Nothing Remains The Same

Better known outside his native Sweden as the leader of acclaimed metal act HYPOCRISY, Peter Tagtgren achieved much success back home with PAIN's last studio offering, 1999's Rebirth, which produced one gold single (“Suicide Machine”) and established the multi-talented musician/producer as metal visionary of sorts. His latest release, the group's third, sees the songwriter expanding upon the pseudo-industrial direction established on the last CD with the addition of bigger choruses and more ambitious arrangements, as particularly evident in album closer “Fade Away”, complete with orchestral sections and a less frantic overall feel than has been the case in the past.

Although Tagtgren has always had a knack for coming up with relatively catchy sing-along choruses, his songwriting has never quite veered into the pop territory, with much of PAIN's material alternating between the more up-tempo bouncy numbers and the more experimental, restrained-sounding cuts, none of which are necessarily tailor-made for MTV or commercial radio. Consequently, it isn't entirely surprising to see that the latest addition to this album's final sequence, “Just Hate Me”, marks a collaboration with mega-producer Max Martin (aka Martin Sandberg—i.e. BRITNEY SPEARS, BACKSTREET BOYS, CELINE DION) and Per Aldeheim (i.e. DEF LEPPARD, LAMBRETTA) on what is easily the most radio-friendly number PAIN has ever been associated with, featuring an instantly-memorable chorus and a thick, laid-back groove that is all but certain to make a huge commercial splash in the singer's home country.

A less guitar-driven release than its predecessor, Nothing Remains The Same is not without its flaws, and one gets the feeling that Tagtgren could benefit from a close alliance with a top-notch rock producer next time around in order to add a fresh dimension to what is becoming a somewhat predictable production style. Despite this, Nothing Remains The Same is another fine addition to Peter's impressive resume, and it is one that will likely be looked upon as one of the stronger releases of the year.