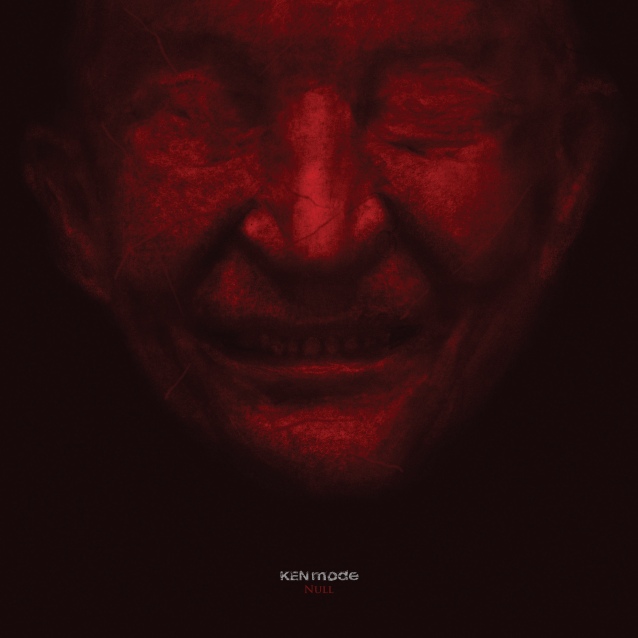 KEN MODE has been creating next level, forward thinking heavy music for more than 20 years now, an inventive blend of noise rock, metallic hardcore and sludge. The Canadian band isn't by any means a household name, but they've gained a relative amount of recognition, having won the Metal / Hard Music Album of the Year for their fourth album, 2011's "Venerable", at the 2012 Juno Awards, Canada's Grammys. "Impress their moms and dads" accolades aside, what matters most is that they've consistently released powerful, unique heavy music, and a solid fanbase and given the band staying power. The Winnipeg-based band returns with "Null", their eighth album (the first of a "two-album arc," as the band describes it),  a release that showcases KEN MODE maintaining its foundational quirky ferocity whilst also transposing it toward a much drearier and depressive landscape.

"Null" is the unit's third album featuring bassist Skot Hamilton, and it's the first to include saxophonist and multi-instrumentalist Kathryn Kerr as a full-time member. Kerr, who also provides synth, piano, percussion, and backing vocals, had previously offered numerous guest contributions toward the band's earlier album, 2018's "Loved". Her increased involvement and significance is felt within the first minute of the insane, discombobulating, grimy opening track, "A Love Letter", as her unsettling sax lines cut deeply. Frontman Jesse Matthewson — who started the band with his brother, drummer Shane Matthewson — then spits out some of his most biting and memorable lines: "It was a mistake to ask me for help," and "This was a mistake. Something is broken. Something is fucked."

"Throw Your Phone in the River" follows, picking up the pace with a rabid hardcore punk and noise rock assault that would make TODAY IS THE DAY's Steve Austin proud. Jesse's guitar work on this track brings to mind a meld of the aforementioned Austin as well as THE JESUS LIZARD's Duane Denison. And sure, KEN MODE has always been adventurous and experimental, but there's an obvious sense that the band found a new sense of urgency and freedom with "Null", utilizing art as an avenue toward catharsis.

For Jesse, it seems that forced confinement during the pandemic exposed issues with mental health, and as a coping mechanism, he explored newer musical terrain. "The Tie" clearly reflects this intended venture, and less overtly, the 10-minute dirge "Lost Grip", built upon a bedrock of Hamilton's throbbing, burly, GODFLESH-esque bass line and Shane's primal rhythms, forwards that energy. Jesse employs his signature, scathing screams and yells, but now, more than ever, he also exudes his sincerity in more audible, conversational and sometimes spoken word styled vocals. There's a revealing, tangible element of vulnerability when he belts out, "I don't believe that you mean well," and "We deserve this," on "Lost Grip".

Whether it's metal, hardcore or beyond, heavy music fans tend to be musically conservative, understandably protecting a purity and realness. A gatekeeper mindset can hinder growth and adventure. KEN MODE is an unknown band to many tried-and-true diehards of various hard music camps. But given an honest chance, KEN MODE will blow minds with albums like "Null".