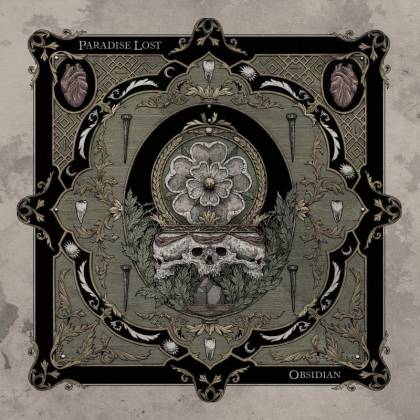 It's both pleasing and reassuring that so many so-called veteran bands are enjoying such rich, late-career surges of creativity. PARADISE LOST didn't always seem the most likely candidates for serious longevity: around the turn of the millennium, the band seemed to be struggling for new ideas and detached from the heaviness that once defined them. If you hadn't witnessed it yourself, you might now struggle to imagine such a period in the band's story, because PARADISE LOST have been on towering form for the last decade. Their last two albums, "The Plague Within" (2015) and "Medusa" (2017),were particularly glorious, as Halifax's finest sealed the deal on their long, slow return to crushing, doom metal, albeit now bolstered by refined melodic sensibilities earned over the preceding decades. As much as certain sections of the rock and metal media obsess over whatever the next big thing might be, isn't it quintessentially and definitively metal to still be churning out great music at the 30-year point?

The great news for PARADISE LOST fans is that "Obsidian" continues the band's blazing-hot streak of top form, while also expanding the last two records' necessarily myopic vision to include plenty of gothic rock and even occasional flashes of progginess. Opener "Darker Thoughts" is simply magnificent; a slow-burning anti-ballad which builds from an elegant, piano-led intro to an emotionally crushing climax. "Fall From Grace" is cut from the same, morbid cloth as recent gems like "No Hope in Sight", but with a flash of old-school fervor and a brooding hook balancing out the slow-motion grimness. Similarly, "The Devil Embraced" reaffirms the British legends' devotion to snail's pace riffs, but it's a wonderfully crafted mini-epic, with vocalist Nick Holmes switching masterfully between glowering cleans and hellish rasp, a genuinely eye-popping lead break and a chorus to kill for.

Elsewhere, "Obsidian" sees PARADISE LOST make a welcome return to their gothic roots. Reeking of leather trousers and cheap speed, "Ghosts" is a blatant and joyous nod to the goth rock old school, like some souped-up SISTERS OF MERCY outtake, aimed squarely at the dancefloor, but just as likely to send a metal crowd into a kohl-eyed froth. In a similar vein, "Forsaken" is as perfect an example of gothic metal as you will ever hear, right down to the reverb-drenched choral backing vocals and Holmes's brilliantly overwrought, furrowed brow delivery; while "Hope Dies Young" is a tense cautionary tale set to a classic, mid-paced post-punk plod, superficially redolent of THE CURE and THE CULT, but also a partial return to the anthemic, muscular PARADISE LOST sound of the early '90s. Best of all, macabre closer "Ravenghast" evokes the futile squalor of the battlefield over some of Greg Mackintosh's heaviest riffs ever: thick with atmosphere and mortal dread, it's both grandiose and admirably uncompromising.

Still kicking, still evolving and, perhaps against the odds, increasingly making the best music of their careers, PARADISE LOST have nothing to prove at this point. But they're proving it anyway, with one of the finest albums they've ever made.