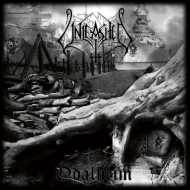 Anyone shocked that on their 11th album Swedish death metal juggernaut UNLEASHED haven't stepped outside of their musical comfort zone nor made any drastic lyrical departures from the Viking tales and pagan escapades on which they've hung their horned helmets long ago? You're not? Good for you. UNLEASHED do what they do very well and continue to make albums on the (relatively speaking) catchier, groovier end of a gritty Swedish DM spectrum represented by the likes of ENTOMBED, DISMEMBER, and GRAVE. If you're at all familiar with UNLEASHED, then you've got a good idea of what to expect from "Odalheim".

Commence the holding of horses however! "Odalheim" will cause no heads to be scratched over stylistic detours, but it will be found surprising in pleasant terms for the fine job UNLEASHED have done in getting a tad more variety and a lot more nuance out of their established songwriting parameters. "Odalheim" might even be considered one of the best of the UNLEASHED bunch in terms of guitar work. Familiar? Absolutely. Compositionally lazy? Not by a long shot.

And that's what makes UNLEASHED masters of their domain; that ability to meet fan expectations of an established musical approach and inject it with those all-important "little things" that help to beat back the demons of interchangeability. Such skill just happens to be more apparent than usual on "Odalheim", at the very least when compared to "As Yggdrasil Trembles". Over the course of a story about "the future of Yggdrasil and those who survive Ragnarök" and the Midgard Warriors' carrying of the proverbial Viking torch into Odalheim, the new album sees UNLEASHED kicking up the tempos, while working into the arrangements some new-ish chord textures and soloing on which considerable time seems to have been spent.

You'll hear the difference right from the start on "Fimbulwinter", an otherwise standard UNLEASHED tune of the mighty that benefits from a superior guitar harmony and a fantastic mid-song break for the solo. Black metal shades are also apparent. Moving through the album we hear a song in "White Christ" that benefits from a strong melody; a riff in the quick-galloping "The Hour of Defeat" that sports a clever little twist; and the sandpaper surface and stuttering riffs that give "Vinland" its identity. Then it's a superb solo on "Rise of the Maya Warriors" and a tension-build (introduced with acoustic guitar) on the ballsy, mid-tempo "The Soil of our Fathers". Less of a build and more a shattering of quietude occurs when the acoustic introduction to "Germania" is shattered with bassist/vocalist Johnny Hedlund's scream, and then it's on to a truly grand finale called appropriately enough "The Battle of Odalheim".

Exactly; those little things do indeed go a long way in keeping the familiar fresh on "Odalheim". We're not talking anything close to a style revamping, so don't even start. Heck, "Odalheim" is arguably rougher and tougher than the norm. That it is faster has been established. What's in the details then? You already know. It's the Devil.